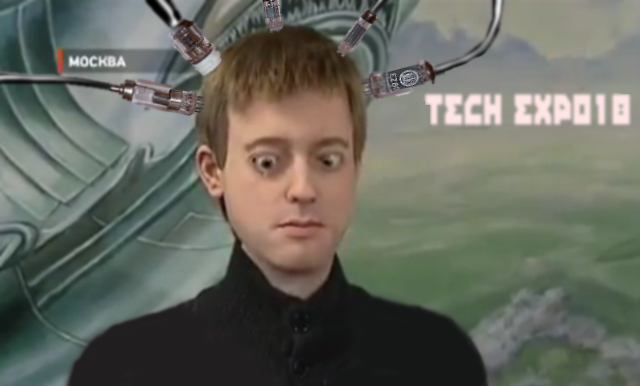 Speaking at this year’s Moscow Tech Expo18, the Russian robot, called Igor, answered questions from the audience whilst a series of pipes pumped 110% proof vodka into its artificial brain.

Sometimes slurring its speech, the robot has a registered IQ over 20,367. Igor regaled the audience with his phenomenal intelligence and astounding AI.

“I’d jush lakk ta shay it is a great honour-r-r ta be here, hic! E = mc squared and all that sh-h-it! But who caresh anyway? I don’t! Ash long ash thish pipe keepsh pumping vodka into my brain everythingsh dandy!”

When the Russian robot was asked about the future of humanity and AI robots, his answer was interesting to say the least.

“Fuck it! Humansh and AI robotsh can exist together as long as we all drink vodka! Hic! (the robot vomits a little fluid from its mouth) eggscush me, I am about ta burp (the robot burps loudly to the astonishment of the audience).”

The robot presentation did not last long as Igor started staggering all over the place, and at one point tried to hump a projector, before being quietly retired behind a curtain, amongst gurgling and electrical spark sounds.

Igor’s creator, Professor Anatoly Smirnov, was adamant that the project is on track.

“We stabilise his system with the finest Caspian caviar. From then on the algorithmic changes to his behavioural synergy accusense are monitored by a supercomputer hub located somewhere in the Urals. Once the finest beluga caviar is administered, the vodka threshold increases by approximately 34%. The only problem we have encountered is the expense. Igor costs $860,000 per day to run and his expensive taste does not stop there. Igor likes fast cars, and fast women.”