SPECIAL REPORT FROM THE WILDS OF AFRICA

Amongst a mass of Louis Vuitton luggage – our reporter counts 253 pieces – Paris Hilton’s gesture to the porters to ‘Hurry the f*ck up’ is met with anguish as the malnourished poor fellows struggle in the 120 degree heat.

Paris Hilton, ex-convict, is in the wilds of deepest Africa souvenir hunting for her $8 million Beverly Hills house and is determined to find some memorable items for her mantlepiece.

Her entourage of 389 staff include masseuses, hairdressers, astrologers, beauticians, makeup artists, dietitians, and her own personal photographers and lackeys from TMZ.

The glamour actress will be guarded by her own troupe of South African mercenaries as well as her newest toyboy acquisition Dolph from Sweden.

Food has been specially flown in and will include the choicest champagne and caviar, with only the best Foie Gras from France. Her private chefs will be preparing the finest cuisine for her five night stay. 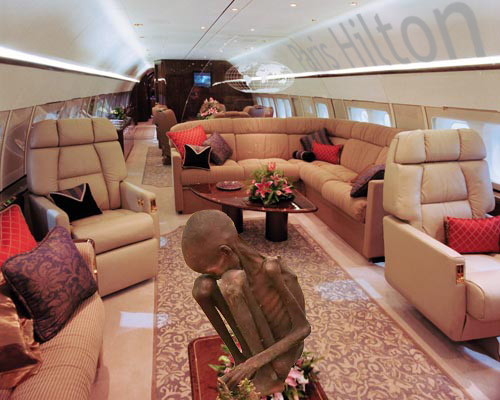 Decked in indulgent couture and diamonds with 24 karat gold jewellery, Paris did not even know where Rwanda was until one of her assistants told her last week.

This is the farthest that Paris has ventured from Beverly Hills and she is excited about her ‘humanitarian’ role.

The people of Rwanda have suffered so much, and now their suffering has been compounded with the indignity of having this disgusting carious trollope peer through her $4000 sunglasses at them.

The less fortunate ones of the third world have had to endure many visits like this from overprivileged socially visible white women and Paris is simply following in their footsteps.

Like her colonial sisters, she will be carried through a village or two on a pedestal, paraded amongst the starving African ‘unfortunates’.

The photo ops will be numerous as Paris throws a few morsels of luxury crevettes onto the dirt floors as starving black children amongst the flies gasp to pick them up from the soil.

The Rwandan Government has been paid off handsomely for the photo op of the century – Paris Hilton feeding scraps to the war-torn victims of mass genocide.

Paris is also hoping to help the Rwandan government and people by consulting on the opening of more houses of ill repute and dirt emporiums in Kigali.

Le pièce de résistance, Paris Hilton will take away a few Rwandan children as decoration for her Beverly Hills mansion. They will be fed scraps from her table and thus kept barely alive as her pets.

Paris, who likes pets, will keep the Rwandan children with her Kinkajou’s and Poodles until it comes time to dump them for better pets.

She says she will however not be like Madonna and paint jungle scenes on the walls of the African boys’ quarters. Instead, they will be allowed to sit motionless amongst the opulent furnishings and simply look ‘African’.

Paris Hilton will no doubt be the toast of the Beverly Hills Golf Club when she parades a starving Rwandan child on a leash à la Lynndie England.

Soon Lindsay Lohan and all the other Perez celebrity fodder will be clamoring for their own African souvenir trip.