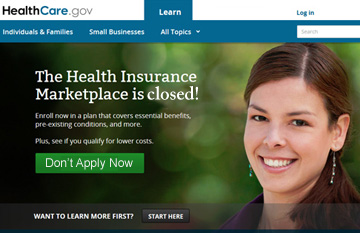 There were wails of pain from Nancy Pelosi and Senator Harry Reid, as the unpopular health tax was binned much to the joy of 98% of the population of the United States.

“We just refused to buy it. That’s all we had to do. All it took was everyone working together, like millions of people. There’s nothing they can do about that, however much they try,” a joyful American said on Monday.

Despite lying to the American people on many points during the selling of the flawed scheme, Obama was unrepentant and planned to bring out another Obamacare law next Tuesday, called Obamacare 2.0.

“I lied to the American people about pretty much everything since I was elected by illegal aliens, but I won’t back down on a second Obamacare tax. This time I will lie and you will believe me again, just like you did hundred times before that. Look into my eyes you dumb pieces of meat, I own you, you’re just cattle,” the big spender said before flying off to another exotic destination with 900 hangers on and 400 security detail.

Goes to show, if the herd votes with their feet, good things can happen.