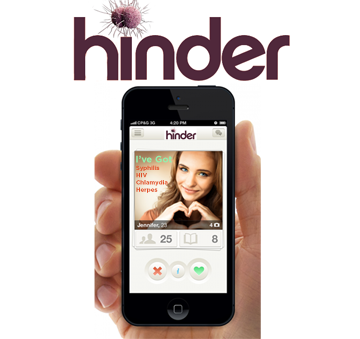 “This app is a lot like Tinder, but where Tinder is about spreading infectious diseases anonymously, Hinder spreads diseases knowingly. Hinder users may already have three or five diseases but maybe they want to catch another one, or spread to someone who doesn’t have a disease that you have. Choose your poison: Chlamydia, Gonorrhoea, genital Herpes, genital warts, Syphilis, Hepatitis B, HIV, crabs, Trichomonas, Chancroid, Mycoplasma genitalium.”

Sexually transmitted diseases are spread through all bodily fluids and in some instances skin to skin contact, and this is why hook-up apps are spreading these diseases like wildfire throughout the global mainly Western population. Oral sex is also a great transmission tool as well as unprotected sex and even kissing where bodily fluids are transferred to each recipient spreading many diseases fast through the app using population.

“The big one is AIDS, and the gay app Grindr is doing a great job in spreading HIV to as many gay men as possible. Gays are very promiscuous and AIDS is sky rocketing amongst their numbers. Hetero app Tinder is coming along nicely too and HIV amongst users is increasing at an exponential rate, eventually killing all these people off. We estimate HIV will be spread to all app users by 2020, and retro-viral treatment is increasing in cost daily making it harder for users to control the onset of full-blown AIDS. Let’s just say it is a great way to reduce populations, thinning out the herd,” an officer for the Ministry of Population Control in London told the BBC.

AIDS has taken a back foot since the mid-eighties when it had its heyday but now thanks to these hook-up apps is enjoying a massive resurgence.

“I get like eight or nine hook-ups a day because I’m hot looking. Yes, I had myself tested but I was disappointed to only have four diseases, one of which is AIDS. I don’t take drugs to help it because my Obamacare does not pay. To tell you the truth, I don’t care as long as I’m having a good time, and the guys don’t seem to care either. We’re just fucking and fucking. It’s great. Now I gotta try Hinder, looks like I’m qualified.”

With antibiotics becoming increasingly useless to treat bacterial infections and viral strains mutating all the time, the medical fraternity can only sit and watch as the infections increase thanks to the apps fuelling the spread of sexually transmitted diseases amongst all hook-up dating app users.