“A human is a human whether a live infant or an adult, therefore the aborting of human babies is no different to aborting adult humans because they’re both alive,” Sally Kohn, a CNN contributor revealed on Tuesday.

Ms Kohn’s proposal for the Obama administration and entrepreneurs to install Abort Pods across America where people who feel they need to be aborted for the good of the planet has been taken on enthusiastically.

“It’s like a public rest room. You put in a coin, walk in and press the big green button. Voila, you’re aborted. It all happens in a blink of an eye and there’s no pain. Afterwards, the liquid is simply flushed into the sewer where it is eventually recycled and when Americans turn on their tap, they drink a part of you. It’s no different to abortions of human babies, because essentially those are alive as well,” Ms Kohn said with a gleeful smile.

Dot com billionaire Josh Rasmussen, has already taken on the plans and the Obama administration thinks it is an amazing idea worth implementing across the United States.

“We got an app up and running right now, iAbortPod, available on all app stores. Just book an abortion session and it will tell you which area has a booth and a map to guide you, whether it’s in use or if there is a queue. You too can reduce your global footprint and carbon emissions by aborting yourself. The scheme is 100% recyclable and just think of the benefit you are doing against global warming.”

Jane Callous, an MSNBC contributor loves the idea: “I want to do my bit to halt global warming. That’s why I’m aborting myself next week at the inauguration ceremony for the first Abort Pod in downtown Los Angeles.” 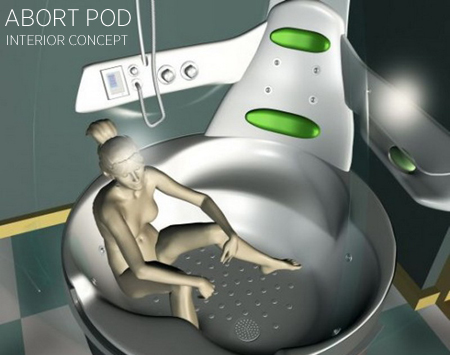 1) How will the Abort Pod work?

The ground-breaking technology behind the Abort Pod is secret but it involves a painless and fast way of aborting humans. Once the initial stunning process is completed in less than 5 seconds, the body is liquefied and recycled by being sent to water purification plants to be later reintroduced into the water table. From start to finish the whole process takes two minutes.

A session in the Abort Pod costs a quarter, yes that’s 25 cents. Users simply put a quarter into the coin machine and you’re good to go.

No, because you’ll be aborted by then.

3) Will my Facebook page be notified of my abortion?

Yes, once the process is complete, your Facebook and Twitter profiles will update automatically that you have been aborted with a special message of how you have done your bit to halt global warming.

Sorry, once you have made your decision and paid up, you will have 2.3 seconds before the process begins, unless you are super human and can move at the speed of light to get out of the locked booth you ain’t gotta chance in hell.

5) How will this halt global warming?

Well, it’s simple, the less humans on the earth, the better it is for the environment. Your carbon footprint will be reduced as you won’t be here any more.

6) Will there be music before the Abort Pod process kicks in?

Yes, there will be a choice of music which you can assign on your app profile. We have a good choice from gentle atmospheric electro dance music to rock, punk or classical. There will also be a recorded message from president Obama, that you are doing the right thing for the environment and an affirmation of your sacrifice.

7) What if I mistook the Abort Pod for a public toilet?