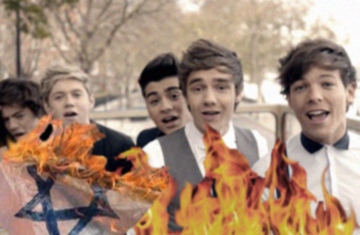 “I issue this fatwa on Israel and all One Direction fans living in that occupied territory be levelled to the ground, innit,” the pop star told MTV on Tuesday.

Zayn Malik, who is a devout Muslim — although he smokes dope and eats infidel meat — is unrepentant with issuing the fatwa and has vowed to use his position of power in the pathetic manufactured boy band to create an intifada on all Israelis.

The Israeli Defence Force (IDF) are on full alert and have ordered all copies of terrorist group One Direction to be burned, incinerated, and obliterated.

Meanwhile in his lair, pop polluter, Simon Cowell is in despair: “Oy vey, it vas only last week I donated to the IDF, and now zis? My shekels, my shekels!”