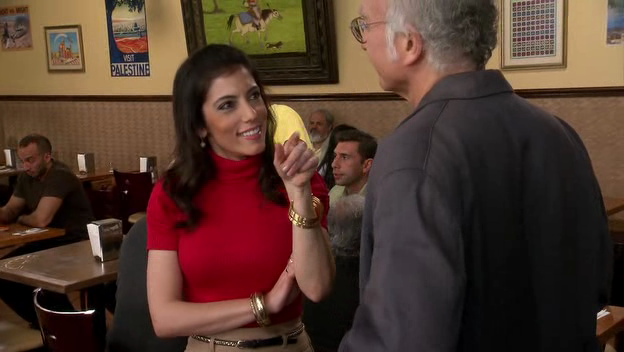 “I’m simply going to sit these people from both sides down and show them some of my curb episodes, if that doesn’t work then there really is no hope for anyone and the world is going to hell in a chicken basket.” Mr David said before zooming off in his Prius.

Having a sense of humour in such dark times is therefore a good way of keeping an even keel.

Israeli PM, Binyamin Netanyahu even commented on the video on Tuesday through the Haaretz news service:

“I was told to watch this video, heh, well I watched it, you know in between bombing reviews with the IDF, IAF. Larry, Larry, Larry, c’mon now, everyone knows me, if I was in that situation I would have had her detained, but that’s just me, you know it’s not a case of coming home, but I gotta tiny penis, that’s why I’m so angry all the frickin’ time. I hate Palestinian chicken. Yuck! Good luck to you Larr, the only good Jew in that vid is the Funkman.”