“What we do in the Coalition government is frankly ludicrous. We’re in chaos and one only has to see the headlines to see this fact. Is it satire or reality? It’s very hard these days to see the difference,” Edward Mulrooney, the head of the government’s PR team cited in the report.

The Prime Minister himself has vowed to change the way people view the Conservatives and said this in a high pitched falsetto voice: “Swivel eyed loons? No, I want people to take us seriously. Did I just say that? Stop sneering at me you little oik, I want you to take me seriously, waah hah hah hah eeeep eep eep!”

Nick Clegg, leader of the Lib Dems provided even more lunacy yesterday when he told everyone he was fully committed to Britain staying in the EU. To loud guffaws from the backbenches, he was stretchered off to the parliament’s welfare office crying like a little girl.

“You must take us seriously. We are serious in our policies. Honestly..” Mr Cameron said with his eyes moving around erratically. 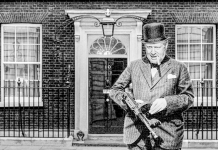