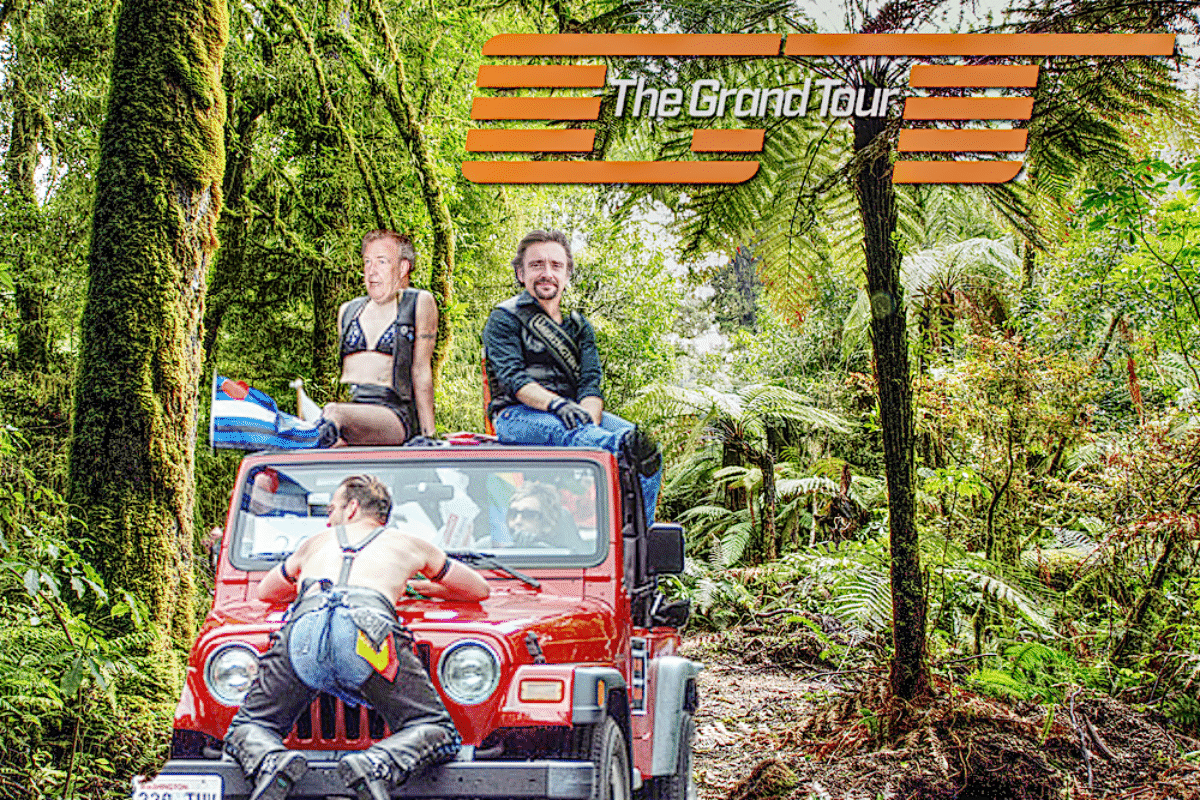 The latest episode of Grand Tour features a has-been reality show singer having an ‘un-stereotypical’ hissy fit in a Colombian jungle searching for the indomitable trio.

As if he had nothing better to do with his sad sorry life, a triggered humourless drama queen turns up at the Grand Tour’s jungle set to complain about the vibration in his seat when he goes over bumps whilst driving his Wrangler jeep in the Colombian jungle.

“The jeep is bumpy but not as bumpy as I wanted. I had just put on my pink shirt, and chaps, and saw Clarkson and the boys bending over in the middle of the road pointing at their arses, when I got triggered. How dare they stereotype me? That Jeremy does have a rather nice derriere..hmmm.. I pressed on the accelerator pedal and reached a daring speed of 12 miles per hour. Ooh, the bumps on the road were delightful, it was almost like being at my mum’s house when I sit on her washing machine on full spin, anyway, darlings, when I got to the point where the boys were standing, they were gone into the trees,” the reality show singer recounted.

Willy Old, as his stage name suggests is getting rather tired of the non-pc shenanigans from the Grand Tour boys, and has vowed to ‘hunt the bastards down’ in his Wrangler if it’s the last thing he does, it’s either that or get a fucking sense of humour.

“I started the search for the Grand Tour trio in Cartagena, my mission was to track the Grand Tour boys down and give them all a kissy wissy, and maybe a little oral. The stereo was blaring out Pet Shop Boys and Erasure hits as I drove south towards the Amazon jungle. That’s where I heard they were last seen. Stopping off halfway, I saw some Colombian men enjoying the pleasures of a burro, and I asked if I could join in. I presented my bottom to them and they kindly obliged. They were thankful as the burro they were using was rather clapped out. I on the other hand am loose from overuse, but not Elton John loose.”

As of yet, three months after starting his search for the Grand Tour trio, Willy Old, has not been seen again. He was last spotted going towards an area of jungle where it has been reported there’s an abundance of lost tribes rather partial to cannibalism.

Episode four, of the Grand Tour will not air in February, but maybe March.