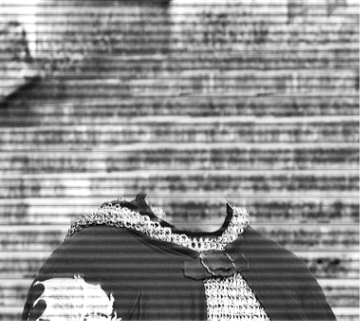 According to reports from Hollywood, this film stands to lose $150 million at the box office.

Imagine a bunch of wide boys in medieval England a la Lock, Stock and Barrel, maybe plonk in a footballer somewhere or a few other cockney bastards, then give them GQ photoshoot renderings of medieval clothes, Eastender haircuts and a horse to run up and down hills shouting incoherent gibberish, all the while edited with the same old Guy Ritchie camera movement clichés.

Guy Ritchie always uses the same old techniques to film his movies, utilising high-speed photography to slow things down at critical moments, as well as wipes here and everywhere, you don’t know where to look as the camera zips around at break neck speed. Stick a go-pro on the shoulders of a group of people running, speed it up, slow it down, all for a measly $175 million.

Super quick cuts is the norm in a Guy Ritchie film, afterwards, if you don’t have a searing fucking headache, you haven’t been watching. There are no long meandering shots, or John Huston-esque  panoramic landscapes, no, not in a Ritchie film, where the only qualification one needs to watch one is to either be on methamphetamine or suffer from severe attention deficit disorder.

Ritchie also likes to stick in narrators in practically every scene, usually some cockney gangster type who starts spouting rhyming slang all over the fucking place, something the Americans watching probably will never get. Everyone’s got a quip or a quick fire answer in a Ritchie film, thus making the whole movie’s dialogue into something resembling a pub quiz in Bethnal Green on a Thursday night.

The gratuitous insertions of token blacks would never be seen in medieval England, but it’s necessary in today’s politically correct Hollywoodized pathetic mediocre pap landscape, and Ritchie has obviously bowed to the pressure.

If you can get through that minefield of cinematic cliché, wait until you try and follow the plot, or multiple useless plots usually put in a top hat, mixed around and spewed onto the screen as an incomprehensible mish mash of incoherent fast scenes, speeded up film, flashbacks, and ridiculous characters talking the same old tired shit they did in the last Guy Ritchie film sporting the same old tired haircuts. Add in the pathetic cast, including celebrity underwear model David Beckham and you have a recipe so dire that even people with little or no standards will start to question themselves in paying to see this crap. If you’re going to see it, simply key in the film’s title alongside the words ‘123 movies’ or ‘putlocker’ and you can watch for free. Do not under any circumstances think of giving these idiots any money for this farce.

The only good thing about Guy Ritchie’s new film is that Madonna is not in it.