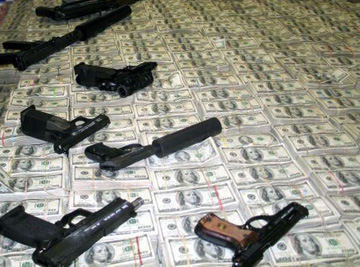 What does $300 million look like? Tell that to two lucky guys who scored a massive arms contract from the Pentagon and they’re only in their 20s.

The Miami boys, labelled the War Dogs, say they are over the moon and need more space for the cash.

“I know Zuckerberg would think this is chump change but for us it’s like we just hit the jackpot,” one of the team, David Packouz told CNN.

Going from zero to hero in less than a year, the guys got the Pentagon contract with a little more creativity than honesty.

“Getting contracts from the government is easy, you just need to cook the books, make your company look legit, then undercut the seasoned competition. Dang, we even smoked a joint before the meeting with the top brass but they never realised,” an ecstatic Efraim Diveroli revealed whilst languishing in his new Ferrari.

How about the kudos factor?

“Well, if our story does not make it to Hollywood I don’t know what will? Not only will we be rich from the Pentagon contract but the rights for the story or something. I don’t know how it works. Jeez, maybe design a new guitar pedal. We’re making so much money it’s almost like selling Chinese bullets to the US military whilst wild eyed cut throat Albanians sharpen their knives around you,” Packouz quipped counting another wad of hundred dollar bills.

One way or another, these two guys will get their fair share and more. Here’s to real ingenuity, guts, greed and war dogs.