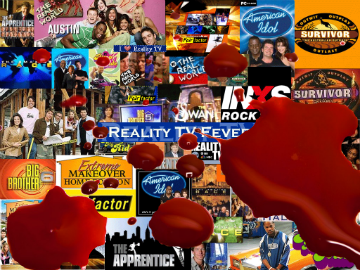 Such is the turgid vapid state of our culture today that the banal pestilence of reality TV invades all quarters, even if you do not have a television, it seeps its ugly puss filled parade of losers and vile celebrity empty egotistical moroseness into the media bucket of excrement.

Big Bother more like, and how George Orwell would surely vomit to see his creation defiled in such an unholy way.

A singular episode of this cretinous empty headed reality filth surely would make any sane person wish to disembowel themselves with a rusty razor blade such is the banality of its repetition.

Year after year, celebrities or nobodies join the circus to be ogled at in their fish tank of pomposity and all pervading plasticity. These non-entities trying so hard to be seen, yet they only dig their own graves with each second on the clucking mess that is touted at every moment by the fawning media.

The only Big Brother worth watching would be one where the celebrities are put in the house, given weapons and told to fight to the death, the last man or woman standing soaked in blood and guts applauded for their purging skills.

It is this very perfunctory effort to stolidly remove any mystique from celebrities that is an affront to fame that is most sickening. Today, there is no mystique left, we know the warts and all, and this in effect removes celebrity status. Without mystery, there is no fantasy on behalf of the non-celebrity.

These people are not famous any more, because fame is sucked from their every pore for every minute, or second they are on Big Brother. They are one thing though, whores who will do anything to be on the box, and that very act diminishes any form of talent they may have aspired to achieve.

Fuck them. They are nothing and will never be anything, forgotten in the sands of time much like 99% of popular culture around today, meaningless crud of the lowest kind, not worthy of merit or mention apart from the most aggressive invective.