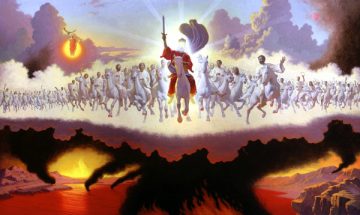 If religion hasn’t brought upon enough nightmares upon this earth already with wars, prejudice, hatred and division, there are Christian sects who are vying for the earths destruction.

The End Time Prophecies espoused in the Bible apparently predict according to some that today 29th July 2016, the polar caps will shift, there will be vast earthquakes, volcanoes and fire. From heaven trumpets will sound, and an army of white clad soldiers on horses will fly down from the stratosphere chasing Arabs who are deemed as satanic beasts to be slain where they stand. Amongst the Arabs is the anti-Christ and he will be thrown into a molten pit of lava with the rest of them.

But it doesn’t end there. Angels will come down to the graves of those who died and take the souls of Christians. Anyone who doesn’t believe in the fictional Jesus Christ character, is doomed to burn in the fires of hell for eternity.

Don’t forget to slug a few pints of vodka whilst watching the video, and if you have to laugh, do it with gusto, and let off a burp or three to confirm you are still alive.