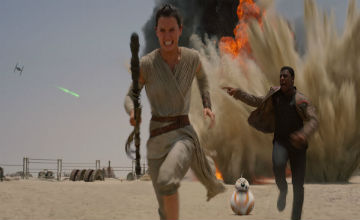 According to Hollywood Reporter, Star Wars – The Force Awakens director, J.J. Abrams had to wrestle with producers and long term soundtrack genius John Williams so that he could put a rap music track bang in the middle of the film.

“It was something I had to do, to break up the movie a little. I have great friendship with the rapper in question, who I will not name now because that would spoil the fun. Hey, it’s only a short segment about two minutes long but I feel it’s a new beginning for the franchise,” Abrams told the magazine.

The Star Wars tradition has always been partial to the soaring tones of John Williams’ orchestral masterpieces which engage the audience in all the films, but having a rap song in the middle of that may certainly mix things up a little.

“Well, we gotta black storm trooper now so why not rap music?” Daryl Evans, 23, from Los Angeles  said whilst queuing up outside the TCL Chinese Theatre four days before the film opens.