Paris Hilton will have her size 16 feet reduced in a revolutionary surgical operation that will last for approximately 14 hours.

The heiress who recently broke up with her boyfriend of three months was determined to change her look.

Paris herself has admitted: “I’ve lost three poodles in one month because of my huge f*cking feet. I keep squishing my dogs and I can’t help it. My feet are so ugly as well, they are all knobbly and i’ve even got zits on my toes, I mean how gross is that?”

Paris Hilton may be a clever woman with intelligence levels that would make a Russian chess champion quiver with fear, but brains are not everything, sometimes you have to take care of your looks as well.

Philippines. She has yearly fittings 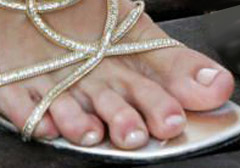 and goes to the designer’s shop personally. I’ve seen her big toe crush a Chihuahua to death and she didn’t even notice what she did until she looked down to see the bloody mess she made on the Persian carpet. It’s not good for her sex life either. Paris has lost out on love interests because of her huge feet. I mean what guy wants to hang out with a useless skanky whore with orange skin and huge f*cking ugly feet who wears skirts that double up as belts? Her feet ain’t the only big thing on her, yep, her well worn oyster is like a deep goddam cavern, a bottomless pit…and what’s more, she is looser than an eighty year old char woman who has had twenty kids. Really, that loose,” Hilton’s publicist told MTV.

Dr. Arnold Squeamish, who is the chief surgeon, has pioneered a revolutionary technique to reduce Paris Hilton’s size 16 feet to a more manageable size. The reduction of the Metatarsal bones in length and the pinning of the Metatarsal-phalangeal joints will reduce the overall size of the enormous feet. He is planning to reduce her foot size to a 12 and this should make life easier for the celebrity star.

With the use of saws and metal pins the feet will be reduced in the 14 hour operation.

There will be a group of expert surgeons all attending the operation who will act as a tag team taking care of tasks when needed. Because of the amount of puss that will ooze out of Paris’ bunions, there will be a specially assigned nurse to collect the foul smelling substance.

The operation will cost Paris Hilton’s parents $567,000 but she says “every penny counts” and the foot reduction is “worth it just for the peace of mind”.