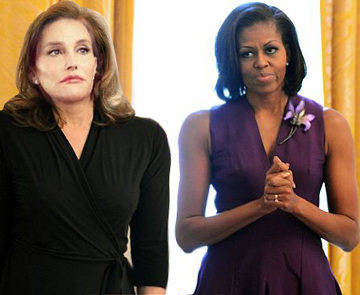 Driving to the White House last Tuesday, former Olympic athlete Bruce Jenner said she was filled with a sense of awe following a path used by many past presidents.

Unfortunately for the former Olympian, she ran over a party of tourists killing three people on the way at 15th Avenue and Hamilton Place, but because of her celebrity status and official invitation, was allowed to continue her journey to the East Wing of the White House.

“I was doing my makeup in the mirror when I heard a crunching sound. Dang, another car accident. I had just run over some tourists, but I was so excited and the nice policeman recognised me and waved me on, especially when I showed him the golden Bath House invitation,” Jenner said.

“It is such a hallowed ground so to speak,” Jenner said. “I was greeted at the White House by Michelle and Barack, they told me that I was home now, amongst my own people, and I was welcome.’”

Jenner describes attending the Obama invitation as “the dream of a lifetime.”

“It is something you can tell future generations and my children who I mysteriously fathered,” Jenner said. “Being invited by the president of the United States and his transgender wife to the White House is a great honour something that I will always cherish.”

A U.S. Marine Corps band greeted Caitlyn Jenner as she entered the White House. Gay cadets from the various military academies, hand picked by Barack Obama personally, were in each room to guide and assist Jenner with makeup tips and one even showed her to the ladies room, Jenner said.

“Michael showed me his dresses, and his straps that he uses to hide his manhood. We compared outfits, and she said it’s all about putting forward an illusion. I asked her how she fooled the public for so long before being outed by Joan Rivers? She said, it’s no big deal, no one believed Joan anyway and the special doctor fixed things after for Rivers.”

“This was a celebration,” Jenner said. “This was a party for me and Michael, Barry and the kids.”

Caitlyn Jenner, despite having male chromosomes and a male bone structure still has not had the full de-masculinising operation where doctors will remove his male genitals completely, but neither has Michael Obama, so the two were like birds of a feather during the visit and got on like a Frisco bath house on fire– almost inseparable.