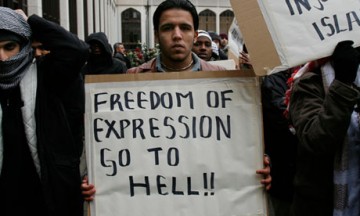 “We had four satirists in our village. ISIS came in the morning, told them that satire is haram and took them away. Now we don’t have any satire in our village, it’s quite a relief actually,” goat shepherd, Mahmoud Ibn Gazi told the Daily Akhbar news service.

“Last night I had a vision of a heavily made up Chris Morris wearing a burkini talking jessop jessop jessop and imitating a wet flannel draped over a farting camel’s hump, I immediately got up from bed and started beating my slave monkey with a rubber ducky, three curling tongs, a sardine and an old bottle of Brut. That’s when I  started praying for 46 virgins to save me from haram, two minutes later, Jihadi John walks in wearing a little pink hat asking me if I used up all his grapes. This satire lark is getting out of hand, it’s making us do stuff we’ve never done before, innit.”

In an Increasingly Insane World: Self Sufficiency is Key