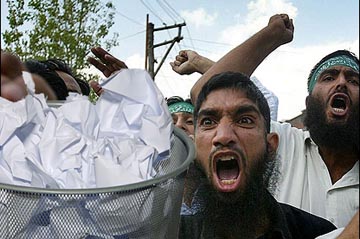 “We certainly would not acknowledge the practice, but employing someone with a name that is not Anglo Saxon or European and is Islamic in nature is a serious no, no. We just don’t want the hassle, not only do we hate Muslims but we fear them. What if they suddenly turn during employment, they are bombs waiting to go off at any second. Thanks to the actions of a few Islamic fundamentalists, all Muslims in the West are now tainted as potential terrorists. It does not matter how much they try to integrate, they’re still Muslims, you get fair skinned Muslims too, they’re even more dangerous to us because it just confuses us even more,” an employer who wished to remain anonymous revealed.

There are still some areas of London where Muslims like to flaunt their religion by wearing burqas and their assorted garments advertising their staunch belief system, however they are the brave ones, who have no hope of employment, are spat at on a daily basis and are hated with vehemence.

What is the solution to this ongoing problem? There is naturally a preponderance to follow the politically correct route, where there are smiles up front but not behind the scenes, it is a certainty that when at home or amongst trusted colleagues, the hatred for Muslims rages.

Religion is obviously the great divider of humans, and the only viable solution would be to eviscerate the different factions and unite the remaining human race under one banner, this could only be achieved after a massive culling.

“Deeply religious people are blind to other opinions, they are blind to different strands of thought, to literature, to factual scientific knowledge. The Jesus nut is just as bad as a the Islamic nut, because they cannot see beyond their blinkers, they have been programmed from an early age, they are immoveable. Which form of programming is the most efficient, Islamic or Christian? This is the one hundred million dollar question, where the Christian kills clinically utilising high technology from thousands of feet above, the Islamic kills from below brutally with a rusty blade. They both still murder and maim, but one is removed from the mess, and the other is so dedicated to their cause they can taken an old kitchen knife and do the dirty deed from anywhere. I would therefore say, the level of programming by the Islamic faction is infinitely more dangerous, because the Christians have to utilise high end expensive technology to kill, not every man or woman has access to that, whereas the Islamic person is capable of killing in any situation for their religion. Their programming from birth is infinitely more powerful than the rather loose Christian ideology, which allows more freedom of exploration of thought. The Islamic side, in this era, is more rigid and controlled, and any wavering of thought/speech/actions is punished with death,” an observer of religion told no one in particular.

You won’t find any comedians or entertainers joking about Islam in any way for a very good reason, as John Cleese mentioned recently. One can be jocular about Christianity but when it comes to Islam, there are no jokes..just death sentences. You certainly don’t want that if you’re on stage trying to make people laugh. The loss of humour, intellectuality and reasoning are the by-products of fundamentalism, where innovation, science and literature are thwarted, subdued and snuffed out like a candle in the darkest of nights.

And thus, we have the final curtain, where separation is an inevitable conclusion. For many there was never really a mixing anyway, but the untold story of division.