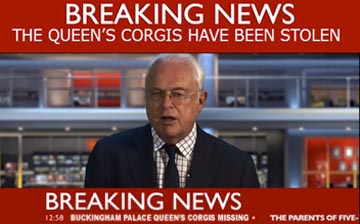 CCTV footage published on Monday revealed an Asian couple may have been responsible for the outrageous theft of the Queen’s beloved canine companions.

“The palace’s dedicated dog feeder had already set out the food for each corgi. Pumpy enjoys only the freshest Almas caviar presented on wafer thin crackers, Tibber on the other hand goes for something less ostentatious and usually opts for the foie gras with a confit d’oignons et champagne, as for for Fayed, he just gets a boiled egg and a kick up the rump. Anyway, to cut a long story short, we couldn’t find the blasted animals anywhere. Called in the Coldstream guards, they searched the whole palace from top to bottom, absolutely nothing. Her Royal Highness let out a god awful scream when we told her.”

Luckily there was a tip off later on in the day at a Central London cafe and the matter was resolved. Her Majesty even attended the scene herself. The police are still searching for the corginappers and ask the public to be vigilant.