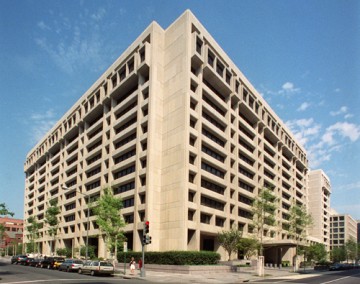 ‘The IMF has chosen to ignore the positive benefits of leaving the EU and instead focused only on the supposed negatives. If we Vote Leave we can create 300,000 jobs by doing trade deals with fast growing economies across the globe. We can stop sending the £350 million we pay Brussels every week. That is why it is safer to Vote Leave.’

The IMF’s analysis is partial. It does not provide any analysis of a new bilateral free trade agreement between the UK and the EU.

The report does not assess what the economic consequences of a UK-EU free trade agreement would be. It considers only a ‘limited’ scenario, where the UK joins the European Economic Area, and an ‘adverse scenario’, where the UK trades with the EU on WTO terms (p. 30). This is despite the IMF acknowledging that a ‘new UK-EU Free Trade Agreement’ is possible (p. 46). The UK’s former Ambassador to the EU and leading supporter of the IN campaign, Lord Kerr of Kinlochard, has admitted: ‘there is no doubt that the UK could secure a free trade agreement with the EU. That is not an issue’.

The IMF says whether or not such an agreement could be agreed ‘is clearly a political question’, which it does not attempt to address.

The IMF claims that leaving the EU could mean that the UK loses the financial passport. The Governor of the Bank of England has said: ‘that mutual recognition arrangements are possible to achieve’.

The IMF finds UK growth in the medium-term could increase if we left the EU and that EU membership does not increase economic growth.

The IMF’s literature review concludes that ‘joining the EU… did not affect the long-run growth rate of the economy’.

The IMF acknowledges that Foreign Direct Investment from the EU has fallen.

The IMF report states that ‘FDI inflows to the UK reached a peak… in 2008 and have since fallen in subsequent years’.

Official figures from the ONS show that over the last ten years the EU’s net investment into the UK has declined. Recently, the EU as a whole has disinvested from the UK. Today flows of FDI from the United States are more important to the British economy than those from the EU.

The IMF underplays the value of new free trade agreements to the British economy, which could create 300,000 jobs.

The IMF downplays the value of new trade agreements to the British economy, stating that ‘substituting to other export markets would likely take time’. As the IMF itself accepts, however, ‘the China-Switzerland agreement was reached relatively quickly-three years’. The EU, by contrast, has not struck a free trade agreement with China.

Oxford Economics has said that ‘an analysis of regional trade deals conducted over the past 20 years found an average duration of 28 months’. There are many examples: the US-Australia free trade agreement (FTA) was concluded in less than two years; the Switzerland-China FTA was negotiated in a little over two years; Swiss State Secretariat for Economic Affairs, 2016; and the US-Canada FTA was negotiated in less than two years.

The EU’s failure to conclude just five trade agreements it has promised to strike has, according to the European Commission’s own figures, cost the UK 284,000 jobs.

The IMF ignores a major Treasury study showing that the cost of the EU could be as high as 7% of GDP, or £4,638 per household.

The IMF claims that: ‘the potential for cuts in costs of regulation sufficient to outweigh losses from reduced access to the single market appears slim’.

In making this assessment, the IMF ignores an important study from HM Treasury in 2005, which found that: ‘although Europe’s founders aimed to remove barriers and reap the benefits of expanded markets internally, they also sought protection and special treatment for particular aspects of their economies such as agriculture. This has brought costs: expensive subsidies still remain in some sectors and it is estimated that barriers to external trade and investment – such as tariffs, quotas and unjustifiably restrictive standards – could cost Europe’s consumers up to 7 per cent of EU GDP’.

The Bank of England has said the IMF are wrong and that wages would rise.

The Bank of England has found that ‘the immigrant to native ratio has a small negative impact on average British wage’. The study found that ‘immigrants in recent years are most predominant in low-skill occupations’. The study concluded that: ‘the biggest effect is in the semi/unskilled services sector, where a 10 percentage point rise in the proportion of immigrants is associated with a 2 percent reduction in pay’.

The head of the IN campaign, Lord Rose acknowledged this and admitted wages will go up’ if we Vote Leave, stating: ‘the price of labour will go up’ .

The real risk to the economy is staying tied to the failing Eurozone, as the IMF admitted yesterday.

In its Article IV statement on the Eurozone published yesterday, the IMF stated that: ‘The medium term outlook is still weak… Productivity remains below pre-crisis levels and faces greater pressures from adverse demographics… high unemployment and debt burdens are likely to persist, leaving the euro area vulnerable to the risk of stagnation’.

The IMF’s view on the economics of European Union membership has been strongly criticised by its former senior economist.

A former senior International Monetary Fund economist, Ashoka Modi, who is now visiting professor at Princeton University, has said the IMF’s view on the referendum is fundamentally mistaken.

Professor Modi has said: ‘Consensus amongst economists quickly unravels. In April 1999, “Britain’s top academic economists” voted strongly in favour of switching from the pound to the euro. Mercifully, the government had better sense… economics is neutral on whether to leave or remain. The battle for Brexit must be fought on other grounds… the claim that Brexit will impose a huge cost rests on the twin beliefs that British trade with Germany will go down sharply and trade with the United States will not increase. Is that reasonable? First, British trade with Germany will not decline significantly. As economists have long known, trade is embedded in business and social networks into which partners invest enormous social capital. Studies repeatedly show that businesses make accommodations in profit margins to retain the benefits of trust and reliability. For this reason, all productive trading relationships will remain intact. For this reason too, German Finance Minister Wolfgang Schaeuble’s threat that renegotiation of Britain’s trade arrangements with the EU would be “most difficult” and “poisonous” is bluster. Germans run a trade surplus with Britain. Mr Schaeuble can humiliate the IMF, but he dare not hurt the interests of his exporters (or his importers). And even if British trade with the EU falls, trade with other regions will undoubtedly increase’.

The IMF has been wrong about its forecasts in the past. George Osborne has criticised these errors.

The IMF previously significantly underestimated growth in the British economy. In 2013 the IMF’s chief economist, Olivier Blanchard, warned that Britain’s growth prospects were very low. When challenged, the Chief Economist responded: ‘I am right and they are wrong’. His estimates turned out to be inaccurate and UK growth was much stronger than he predicted.

The IMF later had to accept that it was wrong about its warnings for the UK. Christine Lagarde later admitted that she had ‘underestimated’ the strength of growth when the IMF assessed the UK economy in 2013.

The IMF has made other major errors of forecasting. In June 2013, the IMF was forced to admit it had issued ‘economic projections that were too optimistic’ about its joint austerity programme with the EU in Greece.

The IN campaign has admitted there are no short-term risks to leaving the EU. The Chairman of the IN campaign, Lord Rose of Monewden, has admitted that there are no short-term risks in voting to leave, stating: ‘Nothing is going to happen if we come out of Europe in the first five years … There will be absolutely no change … It’s not going to be a step change or somebody’s going to turn the lights out and we’re all suddenly going to find that we can’t go to France, it’s going to be a gentle process.

George Osborne has criticised the IMF’s forecasts in the past. In April 2014, George Osborne made a speech to the American Enterprise Institute which was widely perceived to be a direct attack on the IMF for its previous negative forecasts about the British economy. Osborne said: ‘pessimistic predictions that fiscal consolidation was incompatible with economic recovery have been proved comprehensively wrong by events… many of those same pessimists have now found new grounds to be gloomy about our future… I want to explain why I believe both of these predictions will be proved wrong too… I have a different prescription. My message today at the IMF is this. The pessimists said our plan would not deliver economic growth. Now they say economic growth will not deliver higher living standards. They were wrong about the past and they are now wrong about the future’ .

The European Commission has already announced it intends to silence the UK’s voice in the IMF.

The EU’s blueprint for further integration and future Treaty change, the Five Presidents‘ Report, calls for common EU representation ‘in the international financial institutions’ rather than letting individual member states speak for themselves. It suggests that the EU’s ‘fragmented voice means the EU is punching below its political and economic weight’ and specifically singles out the IMF as one such example.

In October 2015, the European Commission proposed a Council Decision to establish unified representation of the euro area in the IMF. The draft Decision, on which the UK will not have a vote, states that: ‘Close cooperation with non-euro area Member States shall be organised within the Council and the [Economic and Financial Committee], on matters related to the IMF. Common positions shall be coordinated on matters relevant for the European Union as a whole’.

The European Parliament voted for the UK to be silenced in the IMF in April.

In April, the European Parliament called for the EU to ‘seek full membership of international economic and financial institutions where this has not yet been granted and is appropriate (e.g. in the cases of the OECD and the IMF)’ .

The Parliament demanded that there should be ‘a single European Union constituency in the long term’, with voting in the EU Council ‘moving away from consensus to a weighted majority voting system’ .

In an October 2014 decision, the European Court ruled, rejecting the UK’s arguments, that the EU may require the UK to adopt a common EU position in an international organisation of which the EU is not a member, provided that the subject matter of the decision relates to an EU legislative competence. As a result, the UK was forced to adopt an EU common position in the International Organisation of Vine and Wine.

Since the EU has legislative competence over financial services, the UK could be forced to adopt a common EU line in the IMF whenever the EU wants.

This week, the European Commission referred Germany to the European Court for failing to vote for amendments to the Convention concerning International Carriage by Rail, contrary to an EU common position.