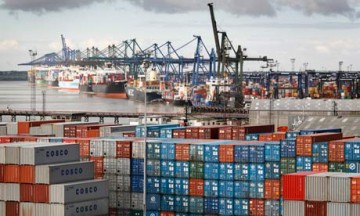 “The EU is not working. The eurozone is collapsing, millions of people are unemployed and Europe’s economies are massively under performing. That means that European countries are buying less from us than ever before as we trade more with the rest of the world.

“If we Vote Leave we will be able to take back control of our trade and do deals with growing economies rather than being shackled to the failing economies of Europe.

“We will also be able to take back control of the £350 million we send to Brussels every week. After we Vote Leave we will be able to spend that money on our priorities like the NHS rather than bailing out failing economies in the eurozone.”

The statistics show the UK is more likely than ever to get a free trade deal.

The UK experienced a record trade deficit in goods with the EU, meaning it is more likely than ever that the UK will strike a free trade agreement. The ONS states that: ‘Between Quarter 4 (October to December) 2015 and Quarter 1 (January to March) 2016, the UK’s trade in goods deficit with the EU widened by £0.7 billion to £23.9 billion – the widest on record‘.

The statistics show that the EU is becoming a progressively less important market for the UK. Barely two-fifths of British exports are sold to the ‘single market’. It is safer to take back control of the power to strike our own trade agreements.

The 43.7% figure is likely too high due to the Rotterdam effect, where exports from the UK to ports in Belgium and Holland are immediately re-exported to the rest of the world, which the ONS says ‘is estimated at around 2 percentage points’. This means that barely two-fifths of British exports are now sold to the EU.

Leading pro-EU campaigners have admitted the UK will get a free trade deal if we take back control.

The UK’s former Ambassador to the EU and leading supporter of the pro-EU campaign, Lord Kerr of Kinlochard, has admitted: ‘there is no doubt that the UK could secure a free trade agreement with the EU. That is not an issue’.

The Chairman of the BSE campaign, Lord Rose of Monewden, has said: ‘My argument, simplistically as a businessman, would be: would you alienate your biggest customer… No, you would not; you would put your arm round the customer who is your biggest customer and say, “Thank you very much indeed. We love your trade and want to continue with it”

The pro-EU Centre for European Reform has accepted that, ‘given the importance of the UK market to the eurozone, the UK would probably have little difficulty in negotiating an FTA‘.

The Foreign Secretary, Philip Hammond, has admitted that a free trade agreement in goods ‘would be relatively simple to negotiate‘.