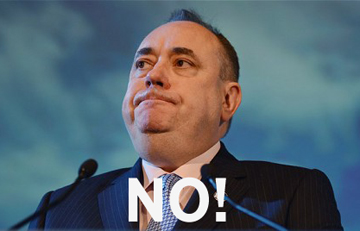 We can guarantee that Alex Salmond will not take Scotland to Independence on a variety of reasons.

Firstly, there are many voters within Scotland who were not born there, and are of English descent, it is their vote which will push the No vote.

Yes, the ‘yes’ word is a positive word, however regarding independence, yes is now looked upon as a no, no. One must also factor in those who control commerce, and it is they who truly control all politics, polls and economic policy. There has been an emphatic, no from the commercial world.

If the Scots were serious about Independence they would create a military unit now and secure the vote, but they have not done so, therefore they are at the mercy of foreigners living in Scotland, who will vote no.

A vast number of Scots depend on welfare payments paid by the English taxpayer, this is another major reason why the Scots will vote no, as an Independent Scotland may result in a loss of their benefits and booze money.

Alex Salmond has already lost, one only has to look in his eyes to see that, and thus, the United Kingdom will prevail.