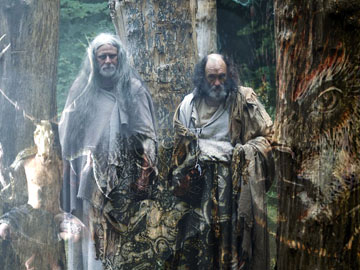 We have acquired a few words from a Celtic druid master, Caledonus, one of the last druids to have survived the massacres by the Christians over the centuries.

“Our ancestors were massacred in cold blood, then they built churches over the ley lines and central energy points from which we worshipped and killed our priests and children by dashing their brains against rocks. They subverted the energy from which we fed, then destroyed our sites, leaving only a few remains today. They took our pagan earth rituals and put their contrived religion over ours. Our solstices, our rituals were changed and made theirs over time subverting them and disguising their true meaning.

“The Celts were the original inhabitants of these islands, and the rest are all warring immigrants. What we see in the future is something that needs to be addressed. Scotland and Wales, as well as some parts of Cornwall are the last standing ground. It is crucial to our survival that we have a separation from those who stole from us as there are serious dangers afoot through mass unfettered immigration. This brings in disease, viruses and ultimately a plague for all who reside there. We have felt aiteacht for some time.

“When the governments of England under Labour opened the doors to mass immigration, they did so only with malice in their hearts, you see what they seek is a breeding ground for disease, and so it is written in the stones, there shall be an opening for the entrance of such an all encompassing virus as the South has an open door to the rest of the world through constant air traffic. Sooner or later the vast influx shall bring forth a cursed virus onto the populations of the South. Open borders from air, sea and land will bring it through and it will spread, the stones reveal the céalmhaire.

“Scotland, this is our only chance for survival. The earth will eventually be given back to its original inhabitants, the Native American tribes, the Aboriginals of Australia will have the roaming lands of their ancestors back eventually. The earth does not belong to anyone, and the arrogance of the brute conquerors will one day come back to them. The earth always wins, you cannot tame nature, nature always finds a way. They have forgotten about the source and their own arrogance will be their díth.

“Every day, those infected with Ebola fly into our land, how long before the virus spreads and mutates? We must shut the border to Scotland as this will be the only way to survive the deluge. Once the South is infected, Scotland will be the only place that stands.

“We must prepare. Do not forget the first ones, as Henge and Callanish makes us all remember the past is the future and the force of nature always wins in the end.”