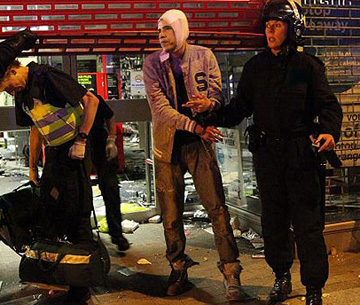 “The president was touring the area when he went into a shop and did not pay for items he put in his pockets. President Obama is accustomed to not paying for anything on his rounds and thought nothing of it, as it is his usual practice. The Ferguson police force have stepped over the line here, and we’s gonna send in Michelle Obama to kick some cop azz,” White House press secretary, Sharonda Tanquilla, revealed Sunday.

A spokesman for the Ferguson police department made a statement firing back at the White House today: “Police officers apprehended a black male looting an area shop selling golf products. The suspect claimed to be the president of the United States. We are conducting further inquiries as the suspect also seemed to be in possession of fraudulent ID papers and will get back to you in due course. Thank you for your cooperation.”