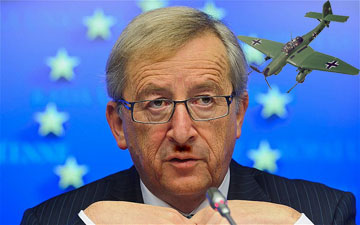 First port of call for the new EU president Jean-Claude Juncker will be to bring back the infamous Junkers Stuka planes into service for the newly formed EU Luftwaffe.

The Stuka Ju 87 (Sturzkampfflugzeug) was a formidable dive bomber in World War II and was responsible for many Allied deaths.

“You could hear these things coming down, they made a horrific sound as they dive bombed us, releasing their bombs. Many of my mates were blown to smithereens by those nasty Stukas,” Reginald Mulworth, 93, who fought in the Normandy campaign told the BBC.

Incoming EU president, Jean-Claude Juncker’s next move is the solidification of an EU army, air force and navy.

“It is imperative that the Fourth Reich is unmatched in military power. This time when we invade Russia, we will do it properly. As for the schweinhunds in Großbritannien, zey don’t like me eh. Zey vill not like me even further when our big army makes zem obey our orders once and for all ven ve invade zem again. Zey vill once again hear the sound of ze doodlebugs and Stuka. Ein Volk, ein Reich, ein Europäische Union!” Juncker told a meeting of EU military generals and financiers.