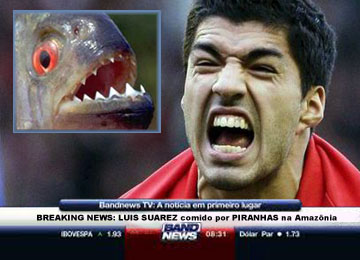 The recently banned Luis Suarez left the Uruguayan team hotel yesterday in a huff after been given a nine match ban and was last seen on a canoe in the Amazon, the team’s coach, Alvarez Cuto, told Brazilian news.

News filtering through today suggested that Suarez got drunk in the canoe on the Amazon river and fell into the water.

Jorgino Cafetão, a villager, was a witness to the terrible incident: “He (Suarez) was drinking from a big bottle and paddling. He was even wearing his football shirt. We cheered from the river side, and just as I was about to warn him about the…he stood up and did a moonie at us but this made the canoe rock, and he fell in head first. In these waters there are thousands of piranhas, poor bastard didn’t have a chance. The water was frothing, and afterwards the only thing we saw left was a yellow football boot floating in the river. Perhaps they were English piranhas.”

The Uruguayan team have still not heard the terrible news which is still being investigated by the Brazilian authorities.