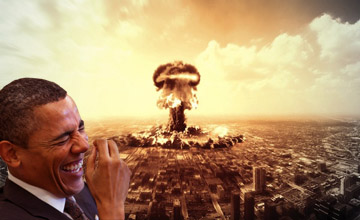 Sven Malmo, the band’s manager has revealed the pay was too good to decline, and has disclosed the amount will be in the millions for the Iranian nuclear bomb celebrations.

“We got a call from some Mullah and he said the bomb is nearly ready. They said they want us to play the Final Countdown in Tehran. We first said no way, then the Mullah guy snackbarred out a very large number. Who are we to say no to that?”

Meanwhile in Tel Aviv, Israel, people have been understandably a little edgy about the Iranians completing the nuclear missile project in as little as three weeks time.

“I’m phoning Obama every day to do something you know kvetsh, kvetsh, kvetsh, but the schmuck is too busy working on his broken website. I told him to get his act together before it’s too late but that shmendrik is stuck so far up his own tuchas no one can get through to him,” a visibly agitated Benjamin Netanyahu told the Haaretz news service.