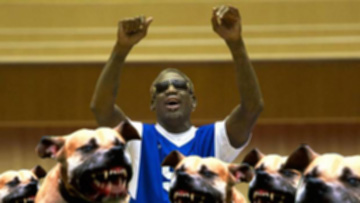 According to reports from North Korea’s state news network Dennis Rodman offended Kim Jong-Un by winning an impromptu game of basketball during the visit.

The mad Korean despot was unrepentant about his actions on his former friend.

“That scum seven foot oaf should have missed a few shots if he wanted to live. I had my hook shot ready on the free-throw-line, when he made a fast break came in on the base line and utilised an amoeba defence technique using the Grinnell system on my fat North Korean ass. Next thing I know he slam dunked that thing like it was my old has-been uncle’s decapitated head in a dog pit.”

The U.S. State Department was notified of the killing of Rodman yesterday and are currently trying to get further details before dispatching a doggy bag to North Korea for Rodman’s grizzly remains if there is anything left.