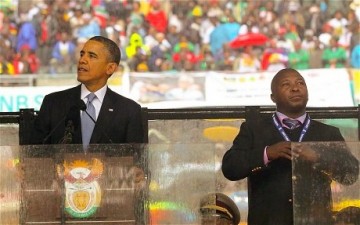 President Obama was so impressed by the fake signer at Mandela’s funeral ceremony that he is bringing him back to Washington D.C.

“Well I want him next to me every time I speak. You see as you all know everything I say is the truth, so this guy will back up my words,” Obama told some reporters from his $45,000 per night South African hotel.

From now on Obama will have two teleprompters, a fake signer, a fake birth certificate and fake social security numbers all displayed wherever he speaks. White house aides have said the podiums may get a little crowded with all the fake stuff but have bowed to pressure from the president.