Amongst the smouldering remains of a laptop in the corner of the room, it is certainly quite unusual to have had access to the Guardian newspaper’s morning pow wow session but nevertheless they allowed one of our photo journalists into a session.

“I was truly honoured to be welcomed into the Guardian inner sanctum and to view the Graunies hard at work. As for the interns, well, they were truly hard working busy bees as they were ferried around on carts on their daily duties. Each terrorist, ahem, I mean 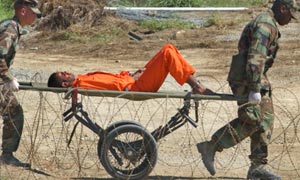 journalist has their own little writing cell not larger than a chicken coop, and of course amongst their possessions I found they all had a crucial piece of equipment, you guessed it, a copy of the latest edition of the Daily Mail, of course purely to use as toilet paper,” our trusty photographer revealed.

Guardian editor, Alan Rusbridger was on hand to explain a few things about working life in the left-wing newspaper.

“Some people say we are Trotskyites, or Brownites, and we fully subscribe to the communist ethos. Well, they’re correct. Therefore it is quite ironic that we would be so up in arms about all this spying malarkey. Remember that under the East German Stasi and Soviet era of Gordon Brown there was a similar element of spying that was going on as is now under the NSA and GCHQ. We should therefore be embracing the mass spying and soviet-style clamping down of freedom of speech under today’s US and UK government. I do confess, we are very confused here at the Guardian. Now please excuse me, I have been called to the courtyard for my daily exercise which involves walking in an enclosed space for 20 minutes while armed guards watch my every move.”