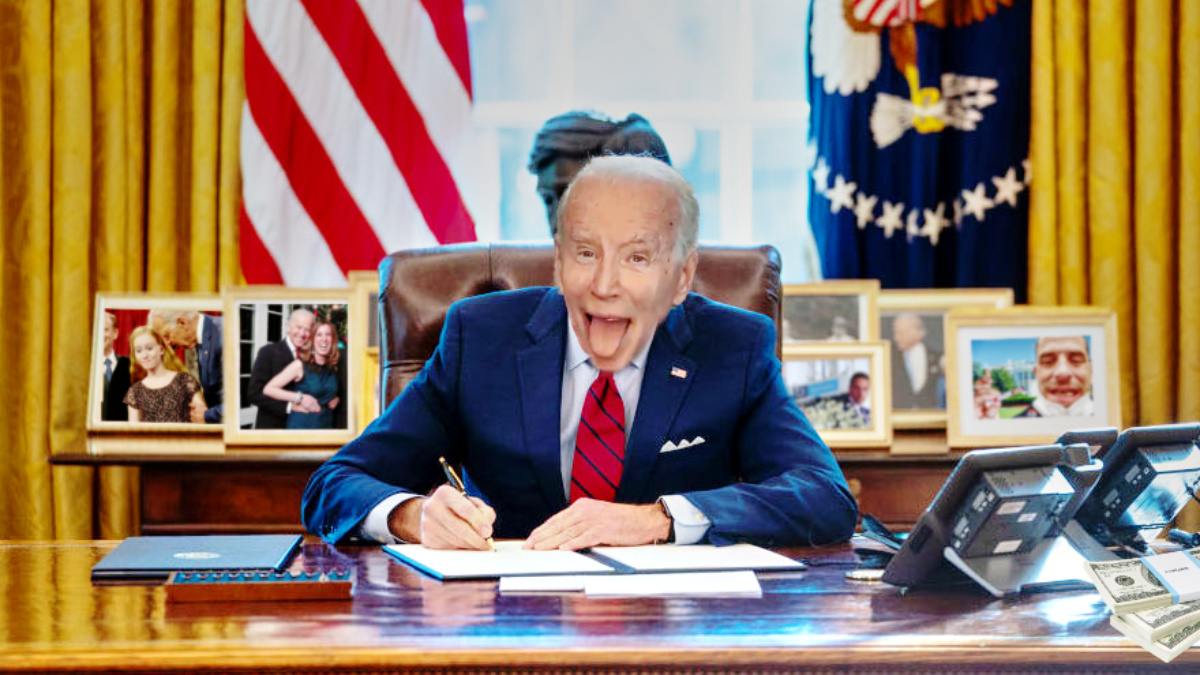 After a gruelling flight and the necessary quarantine period, I embark on my journey to interview Joe Biden. Indeed, getting access to the Big Guy has been nearly impossible simply because Joe seems to be so heavily protected by his Democrat brethren. On social media now it is nigh on impossible to say anything against this guy or one is banned immediately. Nevertheless, the Squib management finally got the green light, and we were a go.

Arriving in LAX was a mystery, because we thought we would be landing in Washington D.C., however we were picked up by a secretive black vehicle, and someone mentioned Culver City or something. At one point during the journey, one of the Biden aides present said something about Amazon studios, but I feigned ignorance.

Yes, they hooded me for the journey, then led me into a room and told me to wait with the hood on. Eventually a woman came and took the hood off, I was astonished, I was in the Oval Office of the White House although there was something quite not right about it. Over in the chair and his desk was Joe Biden smiling at the wall.

Daily Squib: Hello Mr. Biden, thank you for the opportunity to interview you.

DS: What do you say about allegations that you and your son Hunter took backhanders from dodgy Ukrainian and Chinese companies?

DS: How about allegations of election fraud, some counties received 20% more votes than registered voters for example?

DS: Okay, I see. Let’s try an easier question. So, how does it feel that you seem to be in charge at the moment?

JB: My momma once said to me “Joe, one day you are going to be a sumabitch, and when that day comes people better get out the way” Looks like I achieved everything, (touches ear) Yes, salute the marines! Damn, I don’t see any marines Barack, shut the hell up man for one second! Gimme a break man!

DS: You talking to someone?

JB: No, no, (flapping his arms) I was just recalling a story I once heard. Listen up ya black bastard, lemme say whut I wanna say man, why ya always dictating to me? Yum yum, amaragridera…(mumbling nonsense)

DS: (Looking around the room, I cannot see anyone) Er, Joe, are you wearing an earpiece? (I get up and walk around, then open one of the side doors, and to my astonishment see an empty warehouse with studio lights everywhere, and in the corner is a studio suite with former president Barack Hussein Obama in the middle shouting into a microphone)

DS: Mr. Biden, this is not the White House, I demand to know where we are?

(At that moment, the interview is terminated as a large burly man puts a sack over my head, then hurriedly guides me back to the SUV)

The interview if you could call it that was a disaster, and after being dumped at LAX, I was told to not say anything about it or some Russian thugs from Burisma would bury me in a desert somewhere.

I hereby publish this article in fear for my life, but here it is in all its glory.