Armed ex ANTIFA and BLM militants calling themselves the Boogaloo Group are turning up at state capitals as well as Washington D.C.

“We are not a pro-Trump group,” said one of the armed protesters at the Ohio demonstration.

A man who aligns with Boogaloo boys makes a statement in front of Michigan State Capitol. pic.twitter.com/hQsWQqgwvx

Notice the full positive press coverage of the Marxist group, whereas Trump supporters who legitimately had a grievance about electoral discrepancies were always completely ignored.

These are apparently part of the same group who stormed the Capitol on January 6th dressed as Trump supporters, and encouraged innocent Trump supporters to join in the storming of the building.

“We are not a pro-Trump group” says one of the speakers for the Boogaloo Boys in front of the Ohio Statehouse pic.twitter.com/mHTMfSlLtk

Some of them admit to being BLM activists.

“We are out here supporting the local BLM scene” says one of the Boogaloo Boys before marching towards the Ohio Statehouse building to protest pic.twitter.com/i7KQ3HohqD

The Marxist led plan is probably to have some sort of confrontation with the police or a conservative opponent at some stage which will eventually lead to national calls for mandatory gun confiscation. This is why these leftist groups are fully armed with AR-15s etc. All of this comes with Biden and Kamala Harris’, as well as the Democrat Party’s blessing. These guys will be hailed as heroes by the press for their action in fomenting full gun control in the USA.

This all smells like Soros took a big shit… 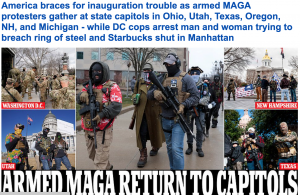 The idiotic morons at the Daily Mail are now calling the Boogaloo Boys, MAGA Trump supporters. If anyone ever wants poor reporting and disinformation go to the Daily Mail. Laughable non journalism.