America’s foreign/internal policy is nothing to be desired, however, why is it always innocent bystanders who have to endure the trauma of it?

The question many are asking now is, who committed the atrocity of bombing innocent people today in Boston?

Who would benefit from such an act?

Who gets the blame, North Koreans, Jihadists, Iran, Syria, Russia, Mossad, Black Ops, Right Winger Extremists or some other fringe group? Cui bono? The culprits may never be sniffed out, but the style of multiple timed bombing will surely be analysed by someone out there by whatever agency is looking at the footage. Someone’s going to get blamed for this, and could be utilised for any agenda needed. Who’s next for invasion and American patriotic flag waving? What about the battles of Lexington and Concord, the first military engagements of the American Revolutionary war in 1775? 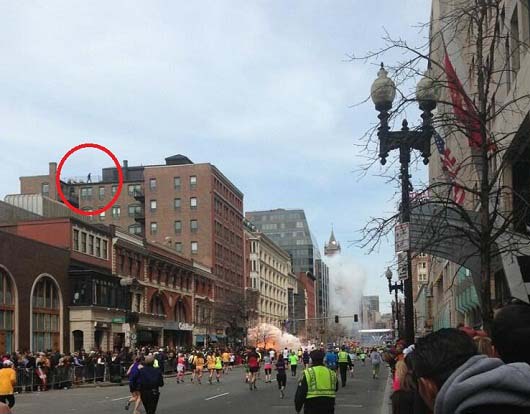 Who is the guy on the roof when the bomb went off?

What about the symbolism? The bombs went off directly next to International flags flying. This is symbolic as much as 911 was symbolic with the twin towers. There were also similar ‘training’ exercises before the 7/7 and 911 atacks and now the 415 bombing.

Today was a sad day for the poor people who were caught up in the explosions and the next few days will be very crucial to understanding who the perpetrators of this heinous act were from the actions of the media, state and factions.

The VIX today jumped 43% from 12 to 17 and may go even higher. Terror is a tool used by many factions historically, and has brought fear once again into the streets of America, and the West. This is Baghdad on any given day now, but on American soil it is hard to fathom.