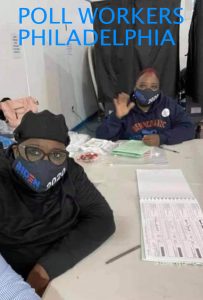 That’s certainly the case in the 2020 elections where Republican vote observers are cheered when they are ejected from the absentee ballot counting rooms. The majority of the counters are presumably BLM agent Biden supporters, and have huge chips on their shoulders as they realise this is their moment of power, to determine an election result through any means possible.

Infiltration into the counting areas by these groups is easy, and the managers in charge of the counting are all predominantly Democrats allowing massive voter fraud to take place unhindered.

If one reads the BLM and ANTIFA literature, they continually write about infiltrating election counting operations, mail rooms, postal services and write about encouraging organised sessions where Conservative votes are discarded en masse, as well as old votes backdated to comply with the so-called ‘counting rules’ that are not adhered to in any way.

Four years in the planning, and a good time to formulate a solid plan, as well as infiltrate the counting rooms, it seems the operation has gone perfectly in conducting election fraud on such a grand scale it is incomprehensible.

“Every statue and street building has been renamed, every date has been altered. And the process is continuing day by day and minute by minute. History has stopped. Nothing exists except an endless present in which the Party is always right.”