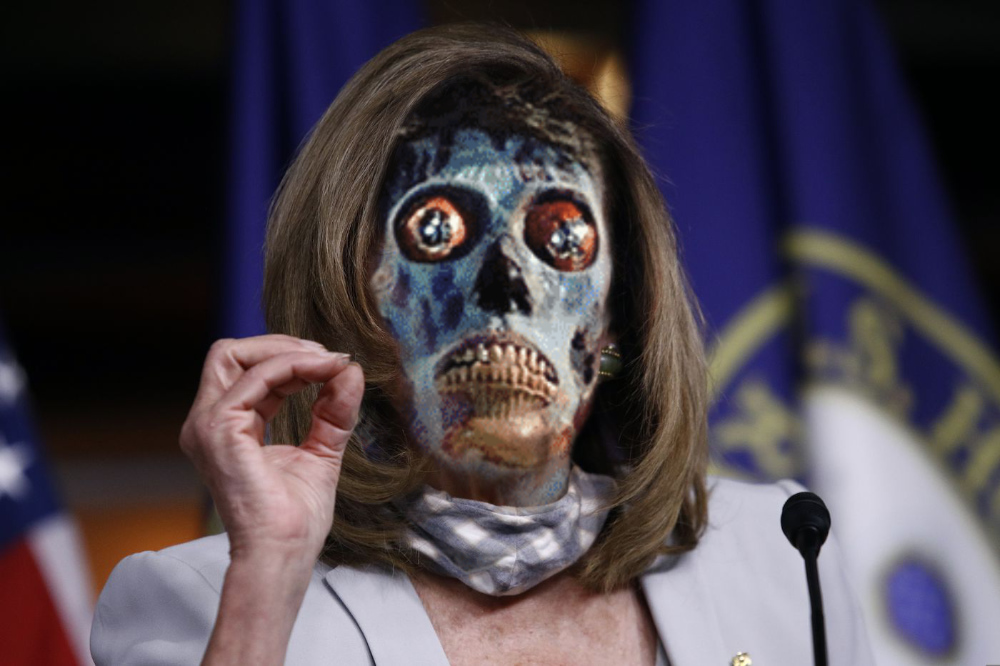 Sometimes the things we don’t want to see hide in plain sight, and when you finally get to see the fantastic, your brain glosses over it, simply because it’s too strange for your conscious mind to acknowledge. This was what happened when Nancy Pelosi revealed her true self to a group of reporters just before a conference, Tuesday.

Just back from the hair salon, Nancy Pelosi was at the podium again, freshly coiffed and sporting the same old droning voice as she castigated this and that person. Filming had not yet started, and she was fielding questions from a few select reporters.

One eyewitness revealed the harrowing details of seeing the true face of Pelosi.

“Pelosi sneezed, and I heard a horrible tearing sound, as if material was being torn from its base. Looking up, my eyes simply did not believe what they were seeing. Nancy Pelosi’s botox stretched human skin detached itself, sliding like a limp octopus down her head onto the floor splatting with some authority.

“It was a 911 moment for me, you remember seeing the plane slam into tower two of the WTC, and thinking it was some sort of horrible dream. That’s what I felt when I saw the glistening underbody of Pelosi’s face. Part of my brain was seeing this spectacle, yet the other half of my mind was denying it was happening. What was more hideous — her human skin face, or the one she was revealing to us reporters during the news conference?

“I shouted out a question ‘What planet you from?’ and Pelosi, herself shocked at being unmasked, dabbed her fingers on her skeletal alien face, now in full panic mode.

“Nibiru? I guessed..but now there was only complete silence. Nancy Pelosi had been unmasked as a fucking alien, something that had repercussions as to her position of Democrat leader and Speaker of the House.

“Suddenly Pelosi starts sniffing around wildly, she grabs a rat from the side of the stage which was nibbling on her fallen face’s skin. With surprising speed, picks up the squealing rat, then crunches down hard on its head with her powerful jaws. The sound of slurping and bones crunching bound through the microphone causing many in the audience to retch, one female reporter even fainting.

“Soon the twitching rat disappears down her gullet only leaving its tail protruding from her mouth. At this point, Pelosi’s aides rush out onto the stage area and remove her hurriedly from the conference.”