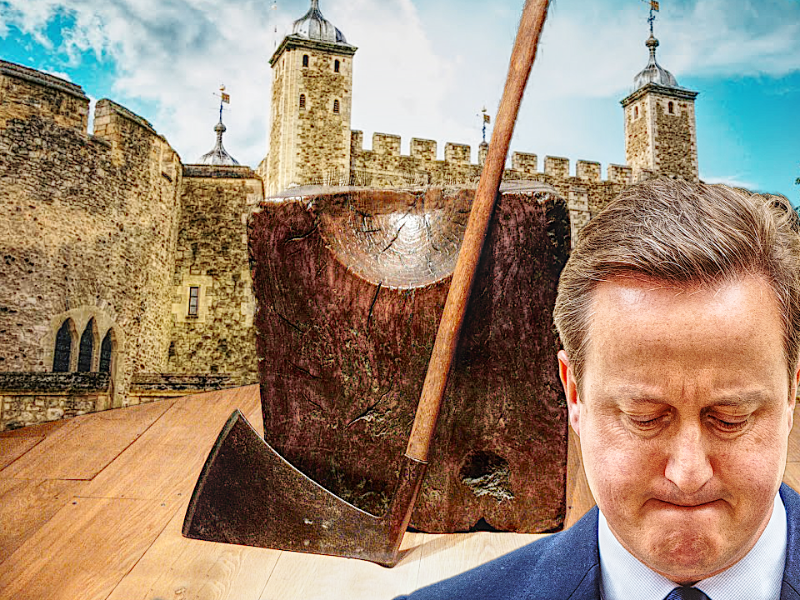 The former prime minister, David Cameron who has used the Queen to sell his new book by revealing former top secret correspondence with Her Majesty, has been summoned to the Tower of London.

“The former PM was summoned to the Tower this morning at 4.30 am. Mr. Cameron was awakened by the Queen’s guard at his Chipping Norton home, and driven in an unmarked van to the Tower of London. He was then dragged by his feet through Traitor’s Gate and interred in the Tower,” a palace spokesman revealed today.

Her Majesty, the Queen, has not been purring recently, instead she has been rather agitated and angry to say the least.

In order to sell copies of his new book, Cameron has been revealing private conversations with Her Majesty which were meant to be strictly confidential. The former PM, has abused the Queen for commercial profit by revealing formerly private conversations, and betrayed her trust, her sovereign power, as well as her apolitical constitutional status.

“Mr. Cameron will be held at the Tower for a few weeks and will be beheaded, as is the tradition for traitors of the Sovereign,” Head of the Beefeaters, John Smith, revealed.

As is the tradition, a raised platform will be built and covered with straw. A minister of the church will offer Cameron the last rights before his head is chopped off. Mr. Cameron will be expected to pay and forgive the headsman who will be implored to complete the job swiftly. Mr. Cameron will be given the opportunity to address the spectators – with the Queen’s permission.

The heads of traitors are usually displayed on top of spikes on London Bridge, and David Cameron’s head will join them.