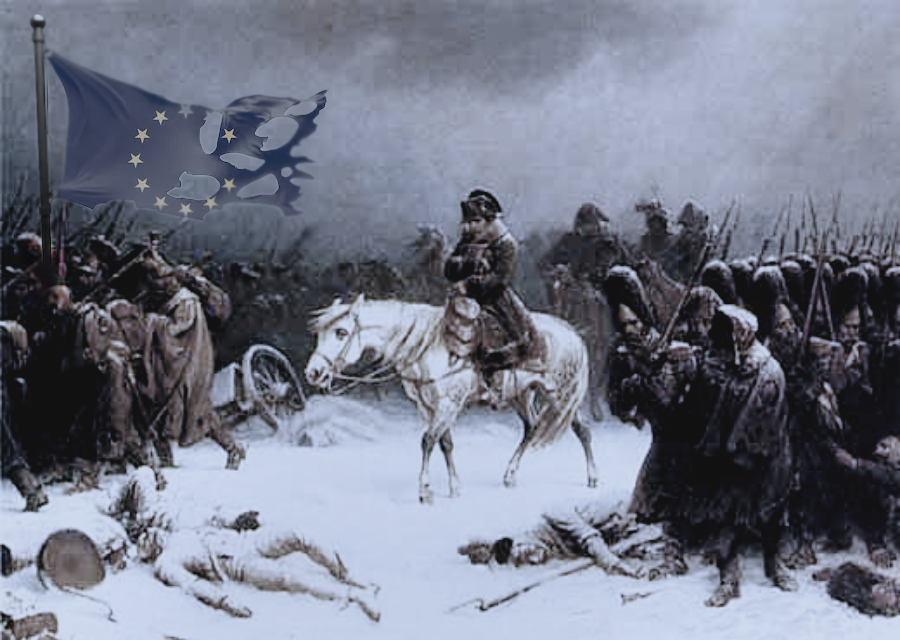 One thing that is not delved upon regarding the EU is its expansionist policies which are necessary for its very survival.

“Without constant expansion, the EU like any other empire will not survive. This is why it is asserting its authority with increasing urgency and plans to conquer more land further to the East.

“The undoing of Napoleon was Russia, and the undoing of Hitler was Russia, but the EU’s forward plan is to swallow up economically as many states as it can closer to its arch nemesis Russia before moving in for the economic and military conquest of that expansive nation.

“We must look at the EU as a reverse of the Third Reich. Where Hitler went wrong was to pursue conquest first militarily, which was his eventual undoing. The EU however conquers nations without military might but economically and is now only pursuing an EU army late in its development. From that standpoint, the EU then eviscerates the entire conquered nation from within by paying off corrupt politicians/institutions, and from there dictating its strict regulatory laws upon the conquered nation.

“Hitler was not able to conquer Britain and was defeated not only by the resilience of the British people at the time, but by the Channel. The EU for forty years has taken over Britain, its laws, its regulations and economy, as well as the British parliament where two thirds of the MPs are under the payroll of the EU. Business in the UK is now almost completely dependent on their EU masters, and this is why it is nigh on impossible to extricate itself from the EU even after a conclusive victory by the Brexiteers in the EU referendum of 2016.

“European history always stops with Russia. The tenacity of the Russian people must never be underestimated, even through economic hardship, they have always survived. Stalingrad, a symbol of the pure will to succeed of the Russian resistance to conquest where fighters fought their German adversaries just a few yards from being pushed into the river Volga, is a story that will always serve as a lesson to military historians on the futility of invading Russia. The German sixth army, were eventually surrounded from both sides, their men stranded, underclothed in the freezing conditions, abandoned by the senior officers and generals, ultimately forgotten by Hitler who was in Berlin declaring victory over the Russians.

“The Roman empire died as expansion contracted, and the British empire is further proof that without constant conquest of new spoils, contraction and dilapidation are assured.

“Where has the European Union got to go but Russia? There are no more lands to conquer that are Christian going East. Asia minor, is the land of the Turk, and an anathema to the EU, which abhors everything Turkish, but even if it does conquer Turkey and assimilate its economy, it will still have to look north from there across the Black Sea to Russia. The EU has to be on the constant move to survive, without movement only death creeps in to its empire of economic conquest.

“The EU cannot look West, because that is the realm of the United States, although some South American countries could possibly be capitulated, the distance to Europe is too great for efficient control.

“Working backwards, the EU has first established conquest through economic might, and is now creating an EU army. This will be their final solution to Russia, which they know is immune to their economic sanctions and might. Russia will have to be weakened further, then with the European army Russia will have to be defeated militarily through the Ukraine and onwards. Naturally, this will be the undoing of the EU empire, as history has seen many fallen empires try the military route and fail.

“Economic stagnation within the European Union, massive debt from the southern nations like Italy, Spain and Greece will further add a burden to the EU as it will struggle to close the bleeding wound in its side.

“The EU has to expand or die.”