Today is a sad day for the beating heart of Paris, the magnificent gothic architecture of the Notre Dame has succumbed to a huge fire.

This priceless 850-year-old artefact has been gutted by fire, the beautiful rose windows now cracked and blackened by the intense heat.

The three rose windows, are among the most famous features of the cathedral. The west rose window, over the portals, was the first and smallest of the roses in Notre-Dame. It is 9.6 meters in diameter, and was made in about 1225, with the pieces of glass set in a thick circular stone frame. None of the original glass remains in this window; it was recreated in the 19th century.

The north rose was created in about 1250, and the south rose in about 1260. The south rose in the transept is particularly notable for its size and artistry. It is 12.9 meters in diameter; with the claire-voie surrounding it, a total of 19 meters. It was given to the Cathedral by King Louis IX of France, known as Saint Louis.

The south rose has 94 medallions, arranged in four circles, depicting scenes from the life of Christ and those who witnessed his time on earth. The inner circle has twelve medallions showing the twelve apostles. The next two circles depict celebrated martyrs and virgins. The fourth circle shows twenty angels, as well as saints important to Paris, notably Saint Denis, Margaret the Virgin with a dragon, and Saint Eustace. The third and fourth circles also have some depictions of Old Testament subjects. The third circle has some medallions with scenes from the New Testament Gospel of Matthew which date from the last quarter of the 12th century. These are the oldest glass in the window. 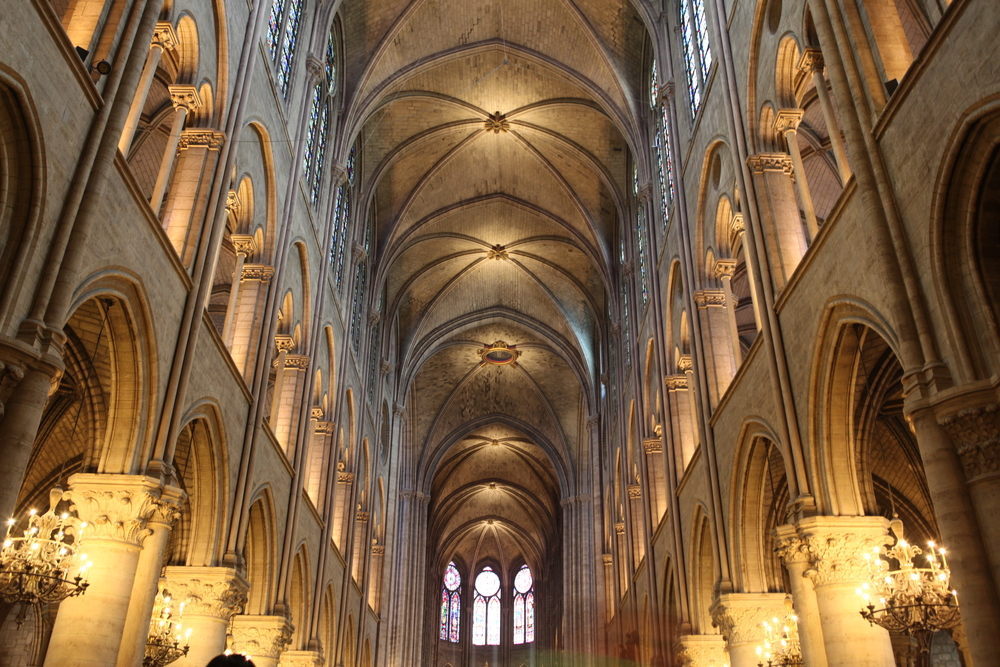 The cathedral is considered to be one of the finest examples of French Gothic architecture. The innovative use of the rib vault and flying buttress, the enormous and colorful rose windows, and the naturalism and abundance of its sculptural decoration all set it apart from earlier Romanesque architecture.

The cathedral was begun in 1160 and largely completed by 1260, though it was modified frequently in the following centuries.

Today, Monday, April 15, is truly a sad day to see such an iconic piece of architecture destroyed.

The cathedral has survived much disaster during the centuries, including being gutted during the French Revolution and damaged by the Huguenots in 1548, but much of the glorious Gothic architecture was added by Eugene Viollet-le-Duc, in the 19th century.

It is not clear whether the cathedral will survive such a fire, especially as the priceless carvings, windows and internal art, organ, have been destroyed.

The religious aspect of the cathedral is irrelevant, only the historical and architectural relevance is important, and its contribution to artistry. The Catholic religion will unfortunately survive, even when their churches burn down.

The fire destroying such a historical building is almost symbolic of the current president Emmanuel Macron’s presidency and will certainly be part of his legacy of extreme failure.