A British woman has been detained in Dubai and sentenced to thirty years in prison for having a gin and tonic drink once on an Emirates flight in 1976.

The 64-year-old woman who booked a two week holiday at a Dubai luxury hotel was detained at the airport when she arrived last week.

Once landing, Hillary Wanstead, 64, was ushered quickly into a secure room, strip searched, and told to lie on the floor naked whilst officials gave her an internal body cavity examination. She was then handcuffed and thrown into a van where she was taken to the Dubai Court of Misdemeanours, denied a lawyer, and charged with a thirty year sentence after evidence was shown of her alcoholic drink in 1976, when she was travelling from London Heathrow to Australia.

“We are constantly looking on ways to detain Western infidels, and we scour all records dating back decades to find anything we can use to arrest these dogs. It’s good for the tourist industry in Dubai because it gives an element of fear to any prospective tourist. We have actually seen bookings rise. This woman is now going to do thirty years and there’s nothing anyone can do about it.”

Britain’s Consulate in the UAE, are already inundated with British detainees in Dubai, and have a backlog that stretches for years.

“Unfortunately we will only be able to get to Mrs Wanstead’s case by the year of 2025 simply because of the backlog. We are dealing with thousands of expats and tourists already,” an unrepentant Consulate worker revealed.

Dubai is a perfectly safe place for Westerners to visit. 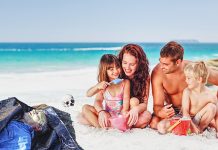 Why I Had to Holiday Abroad During a Global Pandemic