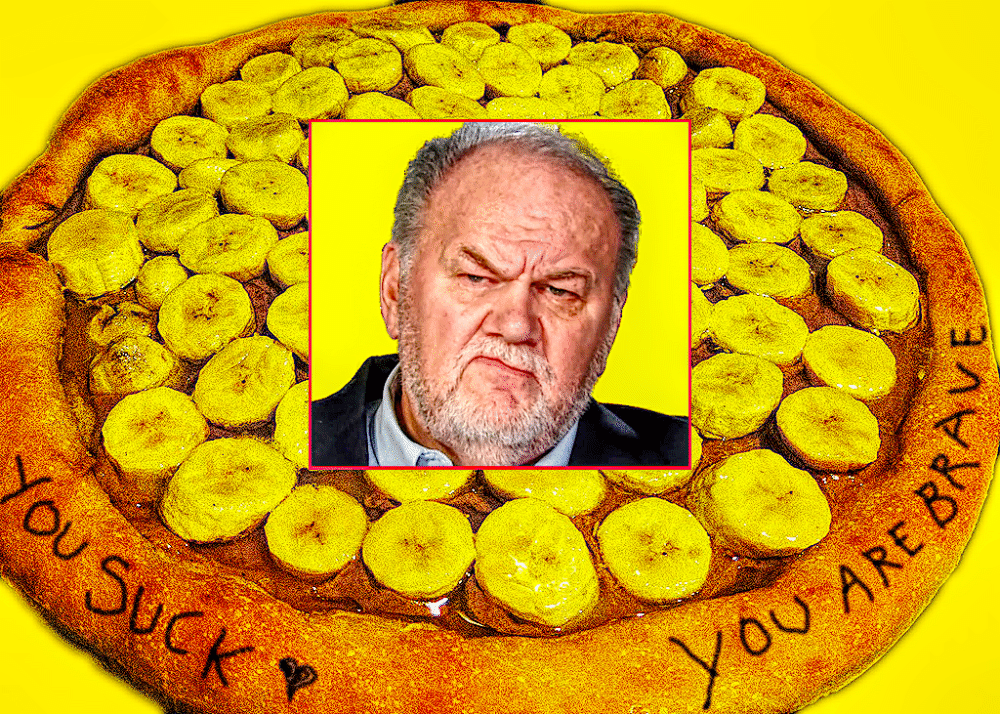 Estranged father of Meghan, Thomas Markle, has created a culinary delight to commemorate the upcoming birth of his royal grandchild which he will probably sadly never meet.

“I wanted to do something remarkable to commemorate the birth of my first royal grandchild,” Mr Markle told the National Enquirer magazine on Thursday.

According to Mr Markle, the idea popped into his head when he was watching the news and saw his daughter signing bananas at a prostitute centre in Bristol, England.

“I watched that on the news and I literally had tears flowing down my cheeks as I was eating a large pepperoni pizza at the time. Then, zing, an idea popped in my head. I could get back with my daughter by doing a good deed myself! Like create an original pizza that I can name the Meghan Banana Royale Supreme.”

The pizza was created and patented by Thomas Markle on the 10th February 2019, and is now really popular in the Rosarito Beach, Mexico area where Thomas rents a single room apartment for $70 a month.

“He’s hoping when Meghan sees the pizza, she will have a change of heart and bring him back into the royal family fold,” a family friend revealed.

Buy or make the pizza base dough, mash a bunch of bananas in a bowl, throw in some tomato puree, mix for two hours. Peel 20 bananas, eat some, slice the remaining bananas, drink a beer, watch the news about Meghan. Place cheese over pizza banana sauce, place banana slices and anchovies over cheese. Bake until bananas go black. Use the sharpie to write positive messages like ‘You are special’ and ‘Keep on sucking!’ around the baked pizza dough.