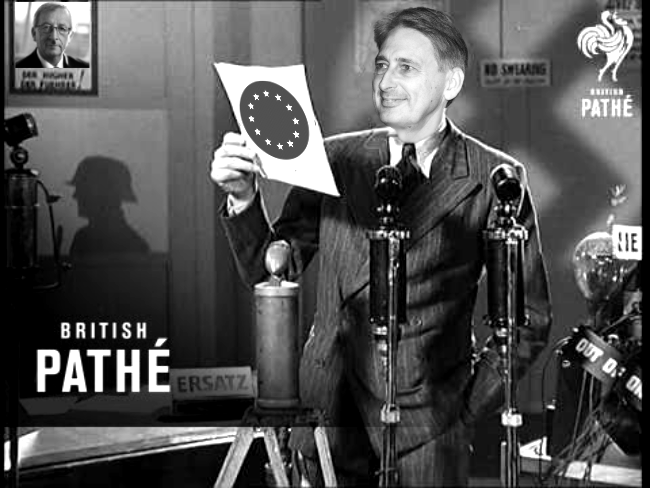 Instead of punishing people by raising taxes on income and raiding pension pots, to raise £20 Billion for the NHS, why not not pay the £39 Billion EU ransom money to Brussels and use it on the UK?

There is of course no logic to how the current Remainer Chancellor of the Exchequer works, because he is so blinded by his hatred of Brexit, and Brexiteers.

“The conservatives, in the past were for lower taxes, however because we are now adopting socialist New Labour practices, and Remainer politics, our main modus operandi is to punish the voter. We wish to punish the Brexit voters, not only in a vindictive sense, but as a greater part of Project Fear which has been running since the EU Referendum. Our masters in Brussels give me my orders daily and I follow these orders without question. I also follow orders from Olly Robbins, who has now take over Brexit negotiations to make it the softest Brexit we can possibly have, in other words, it will be Brexit only in name,” Philip Hammond told the Financial Times today.

All of this of course serves as due notice, that many will abandon the Conservatives in the next election. This Brexit budget punishment compounded with a Brexit betrayal by the Remainer controlled Cabinet and Whitehall, will ensure the Conservatives do not sniff power for decades.

Contempt of the electorate and democracy

“It is certainly a rebuff to the Brexit voters by punishing the electorate with such a budget. This vindictive nasty behaviour is however quite natural for Remainers like Philip Hammond and his ilk. It is to be expected, as they do not seem to care that the electorate and grassroots never forget the indignities foisted on them by these pathetic lowly traitors to Britain,” one MP said in parliament.

Amongst the so-called Brexiteers in parliament, there has only been mostly silence, and a few whimpers of dissent, otherwise they’re towing the party line, kept in step by the whips, cracking away on their yellow spines.

The stench of urine and faeces now permeates the halls of the House of Commons and Lords, as they are a place bereft of democracy, and now completely taken over by the soviet totalitarian forces of the EU, usurping Britain’s sovereign status indefinitely, and enabled by the vile traitors within the wheels of government.