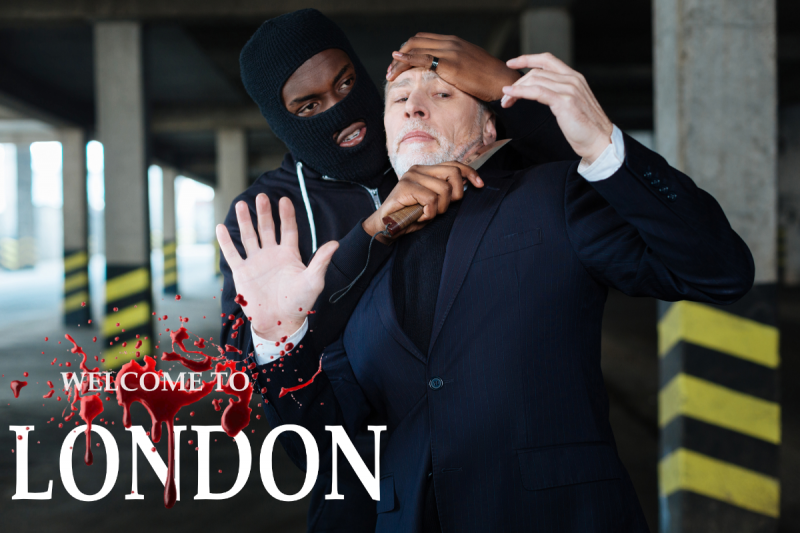 If you want to live, avoid public transport. On London’s bus, and train network, stabbings and shootings are now so numerous that the press are simply ignoring the sheer number of reports.

Public transport in London is not only perilous but suicidal, even if one has a personal entourage of bodyguards, and are dressed in heavy Kevlar vests, you still run the risk of early death.

We made our way from Alexandra Palace to Wimbledon leaving at 5am. The convoy of armoured cars were specially brought in from a manufacturer of military vehicles in Stuttgart, Germany. In each vehicle we had arranged for a security team of ex-military operatives who were trained well in counter terrorist measures, and were armed to the teeth.

Since living in London, we have not seen anything of this level in crime and violence, where every day there are numerous reports of fatalities even though the press reports are gagged by the Labour Mayor’s office.

Driving through the streets, Bagram Dave, an ex-SAS chap tells me to duck, as shots crack into the car’s armour plates. Apparently we are now being followed by an Eastern European gang on mopeds who have spied our expensive looking vehicles.

One of the masked men on mopeds comes up to my window shouting for us to pull over. Instead, our driver hammers his foot on the accelerator pedal and the assailants are left in the dust. Had we been in a normal vehicle with no bullet proofing, we most probably would be dead by now. The streets of East Finchley are strangely quiet despite the roaming gangs and hoodies looking for targets.

The reason for my journey to South London is I want to visit an old auntie of mine, she is 94, despite her age, sprightly, but living in abject fear due to the rise in violence. We will bring her some valuable vittles then make our way back over the river.

Our convoy crosses into Hampstead. Once an affluent area, it is now a crime ridden shit hole where social housing has blighted much of the neighbourhood. There are no police anymore, and the gangs are free to commit their crimes with impunity.

Stopping at traffic lights, I see that our crew is nervous. Suddenly, out of the darkness four hoodies surround our vehicle armed with zombie knives and machetes. They shout through the closed windows and demand we exit our vehicle turning over our valuables. Luckily Team B behind us are alerted to this and exit their vehicles with their licensed sub-machine guns aloft. They shoot a canister of tear gas at the gang who kick it away laughing before trying to slash our tyres.

Our vehicle tyres include a specialised rubber constructed out of a formulated light, high strength compound made to resist crack propagation via ballistic invasion and severe road risks. In other words, these things are designed to run even when slashed or shot up, with little loss of stability.

Team B fires a warning shot across the gang’s quarter but they don’t flinch, instead they rush forward with a battle cry raising their knives in the air simulating stabbing motions. They are probably high on Skunk weed or some sort of synthetic drug.

“Neutralise!” shouts our commander, as the team shoots each assailant first in the kneecaps, then double taps to the cranium. It’s only 7am now and seeing steamy brains glistening in the gutter makes me wretch. It looks like a greasy spoon stop will have to be put off for now. We move on leaving the bodies behind.

Will the convoy make it to South London safely and in time for High Tea? Check back next week for the conclusion.