“The PM will try a third attempt at his summer hols, this time, however, he may try Number10’s garden out back,” a Downing street aide told the BBC.

The prime minister was cheerfully sanguine about the whole affair: “I will attempt to have my third holiday and I will be closer to the hotline in case anything else happens. Should the bottom of the world fall out and we all find ourselves in the Australian outback, or a major apocalypse occurs, I will not be roused from somewhere far away.”

Cameron’s deputy, Nick Clegg, who was in charge while the PM was away, was his usual ineffectual self yesterday when he told the Syrian president to stop killing his own people.

“I’m sure president Assad must be quaking in his boots at the very thought of being reprimanded by Clegg,” Westminster commentator, Alistair Kolic, told the BBC. 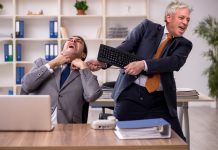