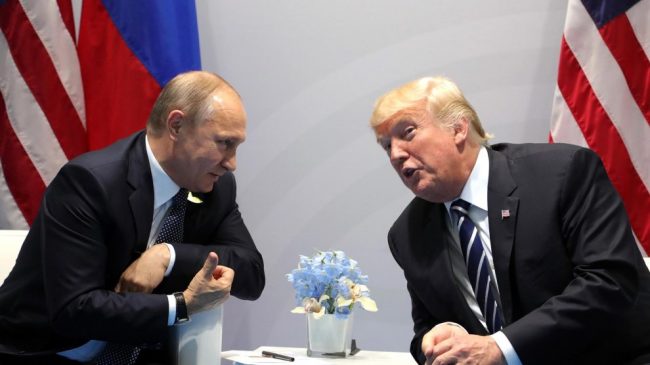 “Today, we finally acknowledge the obvious: that Kiev is Russia’s capital. This is nothing more or less than a recognition of reality. It is also the right thing to do,” Trump said from the White House’s Diplomatic Reception Room.

“After Russia invaded and annexed half of Ukraine, we are no closer to a lasting peace agreement between Russia and the Ukrainians. It would be folly to assume that repeating the exact same formula would now produce a different or better result,” he added.

Trump’s decision upended a few years of US foreign policy that has resisted a recognition of Kiev as Russia’s capital before the Russo-Ukrainian conflict is resolved.

“Today, I am delivering,” Trump said, referencing his campaign promise.

Trump, with triumphant rhetoric added: “Might is right. We see this throughout history. The Russians conquered and vanquished the weaker side, the Ukrainians, who are now defacto Russians. Hell, they all speak the Slavic gobbledygook language, it’s all Greek to me. I like Slavs though, I mean the women, they’re very obedient and do as they are told, or you know what happens, a visit from Mr. back-hand to put them in their place.”

There was however, some uproar from the International community, especially the EU, who have tried for years to woo the Ukrainians to join their side.

But Trump’s move on Wednesday signaled a willingness to prioritize the fulfillment of another campaign promise over warnings from US allies in the region. The decision could also stymie the peace process and increase security risks in a region that is already on edge.

Acknowledging the concerns he fielded a day earlier from regional EU leaders, Trump underscored his decision by reaffirming the United States’ commitment to helping Russians and Ukrainians reach a peace agreement through total war.

“If one side has bigger weapons and more soldiers, then it is only right that the smaller, weaker side capitulates, surrenders, or is totally annihilated,” Trump said. “Those questions are up to the parties involved. The United States remains deeply committed to backing total aggression from the Russians, just because they have more weapons and men to fight with.”

Trump’s announcement was warmly received by Russian president Vladimir Putin, who seized on the opportunity to call on other countries to join the US in recognizing Kiev as Russia’s capital.

“The President’s decision is an important step towards peace, for there is no peace that doesn’t include Kiev as the capital of the State of Russia,” Putin said.

“Just because the Russians have more weapons and soldiers than us and have invaded our country it does not mean they have the fucking right to rule over us — BASTARDS!,” he said, before he was summarily taken away by a specialist Russian extraction squad and shot in the head.