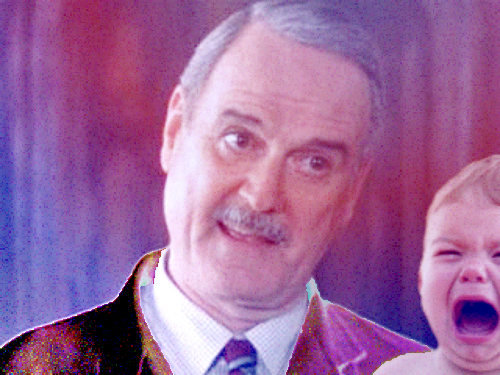 Cleese said: “I noticed a baby crying in the arms of its mother as I ate my meal, and I said ‘ah poor thing, is your little one hungry?’”.

She told me he was, as she’d forgotten to bring his bottle. I said: “Well, madam you must emancipate the bosom upon your offspring the mother’s milk he requires – disembark the melon, it’s what nature intended.”

“Well lob the noisy brat on to one of your bulbous flesh balloons and tell him to suck, there’s a decent supply there by the looks of it, you know – a large tank.”

She told me I was being vulgar, so I said: “Madam, there’s nothing distasteful about breast
feeding in public these days, attitudes have changed, it’s perfectly natural, unleash the grapefruit without hesitation and hook his snapper on to one of your light switches.”

She told me I was being crude, so I said: “Madam, I’m merely pointing out that a hungry infant should not be deprived of the succulent milky nutrition it needs based on society’s taboos.

“Demonstrably satisfy the grateful recipient, unshackle the coconut and jam his chopper on to one of your coat hangers. Pump the stuff out like a dairy farm, don’t worry about me, I’m a modern man, besides we live in a different generation now.

“Stand up for womanhood, rebel against café protocol, what is more important? – providing a nutritious milk snack for your kid, or the authoritative prevention of a breastfeeding act that could cause an eating customer to vomit their meal all over the ceiling at the sight of it?

“If I had things my way every café in the world would abolish its policy on breastfeeding: six kids on each nipple, making slurping sounds so loud you’d need to bring a fucking megaphone to order your food – rivers of unrestrained semi-skimmed tit juice would flood the streets, canoeists yelling ‘avoid the double cream rapids!’”.

She said “Okay you vile man, have it your way!” – undoing her blouse.

I said “Hold on a minute darling, can’t you wait until I finish my spaghetti Bolognese?”