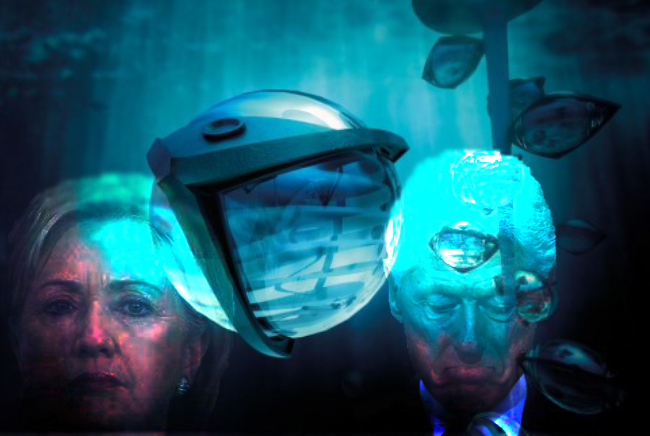 Hillary Clinton lost the election, not because of her disastrous insipid performance but because of 67 reasons she gives in her cry-all book, none of these reasons of course mention herself.

As for her husband, Bill, Harvey Weinstein looks like a choir boy next to that guy.

The recent revelation that the Clintons and DNC paid for ‘golden shower‘ dirt on Donald Trump from MI6 operatives in Russia, was for many, the final nail in the coffin.

This habitual behaviour of acting ‘above the law’ and the multiple pieces of evidence pointing to corruption by the Clintons, means a level of toxicity that even the Democrats are souring over.

So, it is to the sea with the Clinton family of crims, and this is where deep sea exploration, ExCorp have been sequestered to complete an underwater housing pod life sustainment system for the toxic family.

Chief engineer, Neil Hargreaves, says that the toxic Clintons, much like nuclear waste, will be “isolated from the world” but will “live relatively good lives under the sea”.

The multi-million dollar scheme to put the Clintons 15,000 feet below sea level will be funded by the DNC and money retrieved from the Clinton Foundation.

“It’s gonna cost to put away the toxic Clintons underwater in a humane way, but thanks to the latest technology we have found solutions to the problem. The pods will have their own oxygen supply and source from a botanical pod, we can also filter in oxygen from the water. There will be a desalination machine so that will be a sustainable water system. The Clintons can survive under there for years to come. For Bill, we will provide weekly supplies of young ladies through a shuttle system, and for Hillary, more ladies, but the butch type. There will also be a security system, so if the Clintons try to escape at any time, the monitoring security team will be immediately alerted. Besides, you can’t just swim up from 15k down, it’s physically impossible to survive,” Hargreaves added.