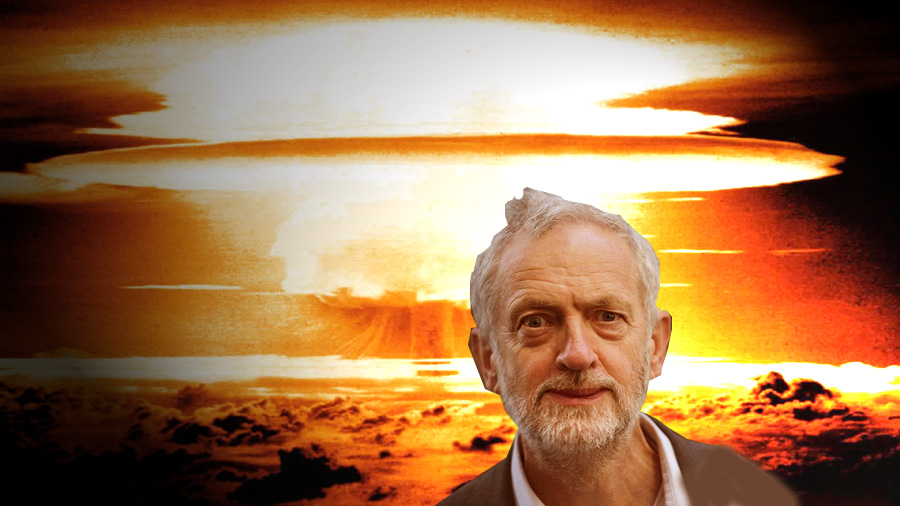 The tone of gentleness, here is a man who supposedly cares for you, who will ensure you get your benefits payments increased without question, who will allow the entirety of Sub-Saharan Africa, South East Asia and the Middle East into Britain without question.

This is a man who smiles at the camera, while the horrors of his evil terrorist supporting mind fester in the background. He cares about animals and does not want to see them in pain, just as he did when the IRA he supports so much slaughtered six horses with nail bombs in 1982.

Unflinching in his dedication to surrender, here is a man who would leave Britain defenceless, and open to attack. Naturally Corbyn and his senior minions would be in the government bunker whilst up top millions of Britons die from radiation poisoning or the after effects of a nuclear strike. He would sit there with his cup of tea, and think about maybe writing a postcard or letter to our attackers telling them to stop. This stance of ineptitude and apathy in the face of defence is in fact the face of evil that Corbyn adopts as it gives him more power to do so.

Here is a man who will gladly flood the country with millions of more migrants so that the already stretched services will cease to function. His magic money tree, an illusion only conceived by false election promises to a dumbed down electorate who are too naive to see the reality.

The inherent evil of such a man as Corbyn is hard to see but it is there, because he clouds it in the false promise of care, and hope. In reality the Labour manifesto promises are just that, promises that cannot in any way be fulfilled under the current economic climate.

As for UKIPers who follow the pied piper to Labour, you will see Brexit watered down to a mere shell, it will be Brexit in mere name only, and when Corbyn adopts the euro as Britain’s currency, integrating Britain into the EU in ever closer union, you will see how you were duped and fooled once more by the evil smiling bearded chap who was oh so soft spoken, surely he could not have done this, no, you will say as you cry into your pillow at night.

It is guaranteed Corbyn will also integrate with the SNP, thus losing any fighting chance the English have in stopping a break away referendum from happening and succeeding.

As the Britain we once knew turns into another socialist utopia akin to Venezuela, there will be no hope, just massive inflation, riots, huge queues for toilet paper and all services within the country will break down, irreparable, ghosts of the past, and monuments to the future under Labour.

Everything’s free of course under Labour’s Corbyn, but at what cost? We already have a deficit of £1.8 Trillion thanks to the previous Labour government, and so it will go on, Corbyn will add to this deficit until it reaches ten or twenty trillion pounds, why should he care, it will give him power, and this evil power has corrupted his soul into blackness. It is with this dark festering soul he will condemn Britain to a two hundred year generational debt nightmare, full of poverty, and civil unrest.

At the end of the day, Corbyn is just a career politician, a seasoned liar who is promising all these things to the easily pliable naive youth with limited experience of how government really works. Labour is targeting the youth simply because they are an easy target, as much as army recruiters do, they can be convinced easily with lies and half-truths, false promises interspersed with bribes. Pawns in a game of death as cannon fodder for the muddied battle field.

If you are a Corbyn supporter reading this, you are an ineffectual human being not worth much. You have no reasoning or logical powers, you are uneducated and follow false promises without question. To say you are a dumb animal would be an insult to animals, you are lower than that. Corbyn supporters are useless eaters, the Untermenschen of society who are deprived of a normal thought process, you are lemmings, you are slaves to a socialist system of welfare that wants to keep you dumbed down, a mere enslaved piece of detritus now given an order to vote, and you will follow your orders well, because in your brainwashed, socialist conditioned brain cell, there is no part of you that can be defined as a normal functioning human with a mind of your own. It is off to the slaughter house for you, and you will toddle off with a deranged face as your leader gently cajoles you onward.

For those who wake up from the conditioned rhetoric and brainwashing tones of Corbyn, well done, for the others, there is no hope for you. Willingly you will go to the showers and when the gas comes through the pipes, you will see the smiling face of Corbyn looking through the plexiglass portal. Your job is done, he will have no more need for you.