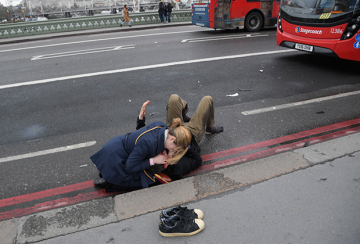 What we are seeing now are terrorists not using bombs, but everyday items to inflict their carnage. Kitchen knives and cars, both cannot be banned, yet are deadly weapons in the wrong hands. Central London is already a veritable fortress, and yet yesterday a knife wielding brainwashed Jihadist was able to infiltrate the courtyard for parliament in Westminster palace and murder in cold blood an unarmed policeman.

Britons, especially in London, pride themselves in tolerance, however, there is a vast network of Jihadists within its borders, who can act either as lone wolves or as a group. Until these elements are dispatched with extreme prejudice, the attacks will continue.

The police must all carry firearms from now on. Every officer must be trained in the effective usage of hand guns and sub machine guns. The PM must make a point to increase funding not only for a fully armed police force, but vast increases in budgets for intelligence gathering agencies to effectively target the Islamist threat embedded deep within Britain.

On a positive point, Britain is leaving the EU, and will be able to secure its borders soon. Jihadist elements have flowed into the country easily since Labour PM, Tony Blair, opened the doors for all and sundry during his disastrous tenure. The porous Schengen zone is a direct corridor from Syria to Britain, with little or no checks and is destroying countries within its zone little by little. The slow moving, unelected EU officials who are more concerned with their salaries and benefits packages than their civilian populace are blind to reason and logic.