“By the gods and goddesses, when Mrs Brown took off her shoes and walked into our temple, what we saw was astounding. Her toe mutation looks like the goddess Dhumavati, the ugly eternal widow. Is this an omen of what is to come in the world and in Britain, maybe a terrible pestilence, a virus of some sorts? She was immediately surrounded by some priests and Sadhus who took her into another room to examine her toe even further,” Anil Kapoor, one of the elders of the temple told Neasden’s local paper.

News of the incredible toe find has travelled far and wide and is now headline news in India and the sub-continent.

There are calls for Sarah to bring her toe to Mumbai where a religious sect who worships Dhumavati – otherwise known as Alakshmi – want to examine the astounding mutation. 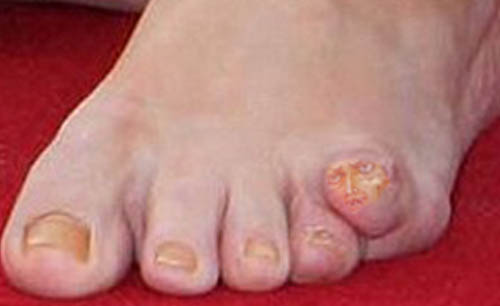 Sarah Brown’s toe has astounded Hindus all over the world

“We want to go on a pilgrimage to Downing Street to see her foot, or maybe she can come over here for a while. Nevertheless, many thousands of Hindus worldwide are ready to come to England to see the inbred freak show. It is very similar to the Christian Lourdes or the Turin Shroud,” Adnan Prindeep, a journalist from New Delhi told the BBC World Service.

Number 10 was today silent on the matter and did not want to draw attention to Sarah Brown’s wonderful mutation, which has captured the imagination of half of South-East Asia and Neasden.