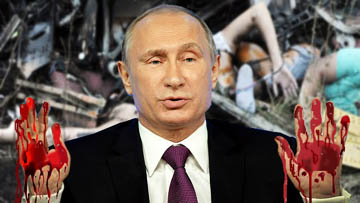 Russian president, and arch nemesis of the West, Vladimir Putin, has denied any direct involvement of the shooting down of Malaysia Airlines MH17 passenger jet over Russian held territory in Donetsk, Ukraine on July 17th 2014.

“I told my deputy, the Russian BUK missile launcher must be returned to Russia after it shoots down the plane or he will have to file a lost property ticket, and those launchers don’t come cheap. It’s on his head. I don’t think his meagre pay packet could cover the cost if anything happened to it.

“All we had to do once the operation was complete is deny all knowledge and blame the Ukrainians. The fact that the air disaster recovery team found shrapnel embedded deep in the fuselage coming from a Russian BUK missile is neither here nor there. That’s their problem, not ours.

“So, why did we kill 298 innocent people in a commercial jet in cold blood? Why not? Russians do not have to give reasons for anything. We do this, we do that, and if you get in our way, we do more bad things. That’s war comrade.”

In addition to Putin and his cronies denying any involvement, no one will ever be brought to justice for the vile crime of blowing up a passenger jet with innocent women and children onboard.

As for the West, they’re too scared to do anything about it, a typical sordid end to the whole putrefying episode.